Yes, this is a friend of mine 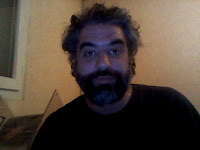 Yes, this is the face of an accomplished writer, blogger, and emagazine publisher.  Add 'friend' to that list as well.
Meet Jason Michel.  The man who is behind the fabulously successful emag called Pulp Metal Magazine.  By the way, he's another one of those mad Brits.  Why is it that all the Brits I've met who have a fondness for dark noir also have this dark, twisted sense of humor that is so close to my own?  Am I a Brit in disguise?  Or maybe . . . just maybe . . . all of the writers I've met so far hailing from that little island are related to me?!
Hell!  Now THAT'S a scary thought!!
Anyway . . . Jason and I crossed paths about a year and a half ago when I sent him a Turner Hahn/Frank Morales story.  He liked it and used it immediately.  So, being the glut for pain as I am, I hacked together a few more stories and sent them off to PMM.  He published them all and I thought . . . sonofabitch!  I might be a writer after all!
And then one day he sends me an email asking if he could use one of the stories I sent him, a Turner/Frank story entitled 'Odd Way To Order Carry Out,'  for an anthology of PMM stories he wanted to put together.  The first collections of PMM stories is called Laughing At The Death Grin.  Some great authors are in this collection.  Both surprised and happy that I was asked to join this montage of excellence. 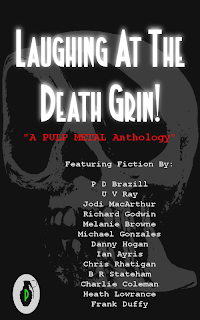 Hitting him up for an interview was a no-brainer.  I had to ask him why in the hell would a sane man want to put himself thru hell and create an emag like PMM?  His answer, I'm sure you'll agree, will conclusively certify that all Brit writers are insane. (grinning and winking)
1. Writer, short-story collaborator, e-magazine publisher. Which came first? Which do you prefer to think of yourself the most?

#1 Well, first came the paranoid megalomania and the overwhelming desire to become a villian in a sixties spy flick. That, of course, still perfumes my every waking moment, MR BOND, um ... , I mean, BR.

Well, to answer the bloody question, the writing came first. Short stories, of course. I actually started off with the intention of never publishing myself. I thought that that way I could be completely free in my writing and never have to pander to any other fucker.
Of course, that way you can sit around in your underpants feeling smug that you are REAL and not like the corporate soul sucking whores making money with mediocrity.
A fantasy and intellectual cowardice was what it really was but it was a good way of honing in on my own way of writing. It gave me the courage to start sending them off.
Then I finally got one published in the now legendary SCARECROW magazine, run at the time by Lee Rourke and Matthew Coleman.

After that there was no stopping me.
As for what I think of myself ... A hack suits me fine.

2. Donning the magazine editor's hat, tell us; what makes for a good short story? What do you look for when you're deciding what to publish?
#2 Of course, taste is all subjective. I have actually chosen stories that didn't slap me across the face with their ideas, but I knew that they were beautifully written and that other people would really appreciate them.
But, the ideas and the vibe of a story are something that I really like. Writing deals with the imagination and the atmosphere of a story plays with the mind and what we see in there.
Give me something unexpected. A twist. A line of dialogue that makes me spit out my mouthful of Merlot over the computer screen. Or a scene that makes me feel downright spooked.

3. How did Pulp Metal Magazine come into existence? Did you wake up one day and say, "Hey! I want to be a magazine editor and waddle through 10,000 pages of drivel just to find ONE good story!" Uh . . . are you crazy?

Actually, that's pretty accurate, except I was drowning in an godawful hangover and then this pernicious thought hit me.
I still think the gods are torturing me somehow ...
I blame Paul D Brazill for agreeing to a column, after that, who could refuse!

4. When YOU craft a story--what do you go after? Plot? Character? Innuendo? Emotions?

One of my favourite writers was the late great Hunter S Thompson (RIP, Mr Duke). I loved his style of getting right down deep and dirty inside the subject himself. Becoming the story. That's how I approach ideas. Attack the fuckers from all sides and see where they lead. Live them metaphorically and at certain times in reality.

It's hell on a relationship, let me tell you.
When you open the door to the bedroom and scream BUT I MUST KILL HIM! IT IS THE ONLY WAY!
That can even send the cat running under the sofa

5. You have a set of classic Pulp Metal Magazine stories out called Laughing at the Death Grin. Why did you decide to go this route? Was it hard to decide who to put in? Has it surprised you on the success or failure its garnered so far? Is there a 'Masks 2' going to come out?

#5 LATDG was actually a logical extension of the magazine, as is the whole PULP METAL FICTION malarky. It just made sense with the whole ebook thing kicking a hole in the arse of the trad publishing route.
Sales have been slow but do we want instant gratification or a long burner here?
I am in negotiations with a couple of other well known PMM faces to put out anthologies of their work with a couple of all new original stories in for good luck.
Not telling you anything else yet. 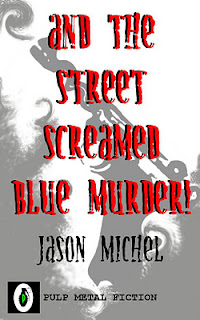 6. What's next for you in the literary world? More short stories? Maybe a ground-breaking novel? And while we're at it . . . what's next on the evolutionary trail for Pulp Metal Magazine?
#6 Um, my novel Confessions Of A Black Dog was published last year in the US and my self published book of shorts is still available on Lulu as an ebook, just because I've been too lazy to take it off. I may put a revised version of that out on PMF in the future.
I've also just released my novella AND THE STREETS SCREAMED BLUE MURDER! over at PMF.
I'm also still working on my Stories From Old Lurk site, which is the most fun I've had writing for a long time, total freedom. Developing the weird and wonderful world of Old Lurk and that multi-dimensional cad - Vincent Blake just makes my knees tingle.
I've also got the germ of an idea to the follow up to the novella.

Besides that I'll be planning to hold the universe to ransom for a while to come ...
(We're in the white mode today because issues . . . lots and lots of issues.  Mostly mine.  And yes, I am taking my medicine.  Again)
Posted by B.R. Stateham at 3:03 PM