The Art in a Bookcover's Art 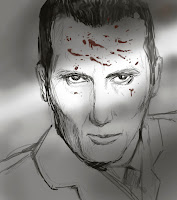 Let's talk about the art in a book cover's art. I . . . we . . . have talked about this before. But it's always good to cycle it around and delve into it a little more. Or maybe I should call it the science in the art of a book cover's art.

The question I am asking is simple. What exactly is it that art in a book cover is supposed to convey to the reader?

Now this is not as simple as it may sound. I can hear your guffaws and raspberries now aimed in my direction. Obviously, you said, for an answer to the question, something like this; "The art in a book cover is supposed to capture the attention of a potential reader."

Fair enough. On the surface of the issue, it is an adequate answer. Yes. Art on a book cover is supposed to attract the attention of a potential reader. But my contention is this . . . merely attracting a potential reader's interest is not enough. Nice artwork can be very attractive. It can rouse a modicum of interest in all of us. But was the art designed to compel the potential reader to stop and seriously consider looking deeper into the possibility of purchasing the book?

Look at the above black-and-white image of one of my characters. What two images attract your interest the most? The character above is a a hit-man named Smitty. I asked the Spanish artist, Javier Carmona, to create an image of a man with hypnotic eyes. Eyes that would make you-the-reader pause and seriously look at. And then I asked him to put splotches of blood, in livid color, splattered across his face.

The eyes and the blood made you stop and look. And they made your imagination catch fire as to who this person is and how dark will be the story found within.  Or . . . at least, that's what I am betting on.

Here's another example. I write another series about an art thief who steals masterpieces of art and replaces them with exact copies. An art thief who is serving in the Royal Flying Corps of World War One. Art history, military history, and an intriguing character. So how do I package that all together?

Scottish artist, Jay Stringer created this image for me of a RFC fighter flying in the cloudy, rain-filled skies of France fighting German fighter planes. I asked specifically for this kind of image, knowing how many, many, many readers out there are armchair military history buffs. I'm betting on the possibility the reader will first be attracted and drawn into a rip-roaring tale of military history. And discovering a secondary delight in finding a character who is an art-thief and accomplished adventurer.

Here's another example. Another series I write (yes, I know . . . perhaps too many series to write in such a short period of time. But what the hell. The plots and characters keep popping into my head. What else am I supposed to do?)

The main character is a retired Army Ranger coming back to the only place he ever called home. A home filled with mostly bad memories. But with a few good ones as well. A home situated in the heart of probably one of the emptiest places on earth--the wide open plains of the Texas Panhandle. Necessity compels him to go to work as a county deputy sheriff. Where the county's emptiness and loneliness is further enforced within his psyche

The emptiness of his home county, the stillness of the air--the loneliness of  his life--all have to be projected into the book cover's artwork. Creating the image to fulfill those requirements takes planning and imagination before the actually image is created. But if it is done correctly, the image alone my tip the scales and compel the potential reader in becoming an actual reader.

Like maybe this image by British artist Jon Stubbington created for me in this cover.

The conclusion to my theory.

The artwork must be exceptional. But the planning before the artwork is created must be well thought out and imagined first within the writer's mind/