After a long wait, the audio book version of A Taste of Old Revenge  ( click here, and then go over to the Amazon page for this book, and click on the preview button to hear the opening few pages of chapter one ) is out. It took a while to get it done. But the finished product is, to say the least, is a humdinger. And I've got to say, the main reason for it being such a great reader is directly related to the gentleman I selected to be the book's narrator. 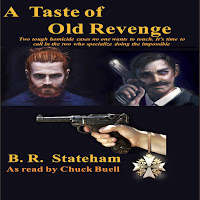 His name is Chuck Buell. An experience, well trained ex-radio jock who has several accomplishments under his belt. But its the voice . . . his voice . . . which brings life into the book's narration. Its deep. Its expressive. It fits the character's image a reader, or listener, would think the main character would sound like.

And that's the key, my fellow travelers. Fitting the voice to the mental image of the main character. Mess this key ingredient up, and your audio book is going to fall flat on its face.

Chuck and I are working on another Turner Hahn/Frank Morales novel. The next audio version will be called There Are No Innocents. Its the next novel which follows after Old Revenge. And so far, we're talking another humdinger of a read. We hope to have that done maybe by the end of November . . . and that's a BIG maybe. Doing an audio book is hard work, brother.  As I have recently learned, doing an hour's worth of finished script takes at least three hours to complete. Usually, a full-sized novel of around 80,000 words takes 10 hours of finished script. Which means 30 hours have been put into to acquire that 10 hours of finished product.

Book four of the series, entitled Two To Worry About, (the written manuscript) should be done by the end of December or the middle of January. After that, I'm hoping Chuck and I can get into producing the audio version maybe in February or March.

Now, the next problem is simple. Find an audience in the audio world who will take a chance and try the series out. That, me buckaroos, is an entirely different problem to discuss at a later date.