The War of the Sexes--and Other Items of Interest 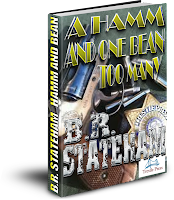 It's out.  A Hamm and One Bean Too Many. The new series featuring Marissa Hamm and Mike Bean.  Cops who, individually, are about as sweet to take as drinking a glass of strychnine with a pinch of cyanide in it.
Hamm has a sharp-edge tongue that will carve up a person's soul with all the grace and civility of a bloody chain-saw.  Bean has a reputation of losing partners--they either retire from the police force due to psychological trauma or from physical trauma. The guy has lost so many partners this way no one wants to work with him.
Necessity forces them to work together.
Think of a male/female version of a Laurel and Hardy gone psychotic.  Or a Nick and Nora Charles' evil doppelganger.  Whatever you think of them they're here to stay.  This is the first of a new short-story series I'm writing for Trestle Press.  I'm hoping it'll stick around for a while.
But there are a couple of other Trestle Press offerings you should know about.  This little epublisher is beginning to expand rapidly.  They've come up with this idea of creating a vast number of intriguing series featuring short stories.  Series that can satisfy the full gamut of a reader's thirst for something new.  I thought I might bring a few of the series to you. 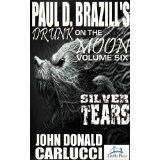 This is the newest addition to Paul D. Brazill's Drunk On the Moon series.  Number seven or number eight . . . I can't remember.  But I can tell you this.  If Paul asked John Donald Carlucci to write his version of the private eye-turned-Werewolf character, Roman Dalton, well then . . . I can guarantee you it is going to be one damn fine story.
The DOTM series is exactly what I am talking about when I said Trestle Press is innovative in finding, creating, and expanding a series through vibrant short story writing. 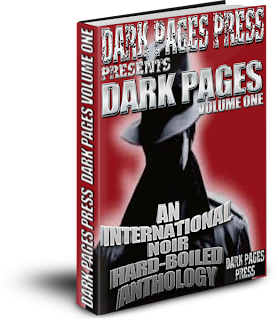 Next (to the right) up is something that is not out yet. I think they are looking toward the Thanksgiving/Christmas holidays for a release.   But it will be soon.  Someone mentioned to the Trestle Press gurus that they should create an anthology featuring an international flavor.  Gather in writers/stories from all over the world who write noir/hardboiled.  The call went out, and from what I hear, the response was overwhelming.
So it's not just a one-shot deal.  This too will be an on-going series.  People all over the world write noir/hard boiled.  Or . . . at least . . . their version of it.  I think it would be 'nifty' to taste'em all and see how they might be similar, and distinctly different possibly, at the same time.
There are more, far more, Trestle Press writers I could have mentioned  (probably got a few of them upset with me 'cause I didn't.   But I promise; sooner or later you will be mentioned in here.)
Exciting times, Maynard.  Nice to be involved with a young, vibrant, and growing publisher who has a vision about which direction epublishing should go.  And they're open to new ideas and new writers.  They're always open for new writers to submit their stuff.
That's a hint, by the way.  Maybe if you write you should send something in.  You can never tell . . .
Posted by B.R. Stateham at 11:42 AM