Vincent Zandri checks in for a few questions 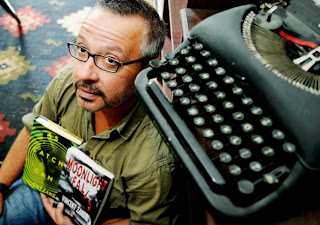 Krikies!
I asked Vincent Zandri, that world-hopping, e-publishing wunderkind of a writer/reporter, if I could throw at him the nominal six-questions for an interview.  Be damned if didn't say 'Yes' and agree to it almost immediately.
Vincent is a publishing success.  In both traditional print,  and more importantly, in epublishing.  He has at any one time two or more of his numerous books in the Top 100 rankings in Amazon, and have kept his titles in the Top 100 for a year or more.  Obviously he sells bazillions and bazillions of books.
So that makes him a success.
He has this success because he is a damn writer.  His reporter's training has taught him well in sniffing out a good story and filling in the details.  You start reading a Zandri novel and you don't stop until you get to the very end.  That, to me, is the mark of a great writer.
So being the jealous type that I am  (aaaaaaaahemmmm!!)  I thought I'd pick his brains and see if I could get a glimmer of an insight in what makes him so good.  I think you'll find the conversation quite interesting.
﻿
﻿

1. Luck. After reading your bio and some other articles you've written about your life, I am struck by the streak of luck that's come your way. Undoubtedly talented--no question about that--but talk, if you will, about the quality of luck, or the lack of it, that affects a writer's life.

Good question…I believe that good luck is like boxing. You keep jabbing enough you’re eventually going land one or two. And if you’re really lucky, you might even land a round-house and knock the poor son of a bitch on his ass. That son of a bitch in this case being this whole crazy writing game of words, pages, books, agents, publishers, critics, editors, predators, sales, and that elusive next book you’re going to have to write. Because remember, it’s never what you’ve done. It’s always what you’re doing or about to do. Those who can’t write another book after the one before are suffering from miserable luck. Which leads me back to the original question. Stay in the business long enough and you will experience streaks of good luck, and just as many if not more, valleys filled with bad luck. You treat the former with a good dose of salt, and the latter with a good dose of booze, travel, reading, women, and just plain living life.

2. It seems to me you base a lot of your stories off real life incidents. Is that a by-product of being the journalist in your life? Or would have you followed this tack even if you were, say, originally a plumber?
There are real stories that genuinely disturb me, not as a journalist necessarily but as a writer and a human being. When some money-hungry college kid who comes from a nice town and a nice home can climb the stairs in the middle of the night and enter into his parent’s bedroom with a fireman’s axe and proceed to bash their brains in with it, I find myself doubled over in pain on behalf of human kind. Sounds a little dramatic, but certain stories have to be told. As a journalist I almost consider the fictional technique of telling a real story as a fiction in line with the more narrative non-fiction writing style invented by Capote in In Cold Blood and later turned into Pulitzer Prize winning fiction by Norman Mailer in The Executioner’s Song. When you write plain reportage you’re going to miss out on a lot of speculation. In other words, what was going on in the killer’s mind at the time of the incident; what did it feel like to bury an axe into your dad’s skull and then pull the blade out. These things need to be dramatized and imagined if we are to better understand the human condition of pure evil. I guess in the end, it comes down to that old adage: You can’t make this shit up if you tried. There are just too many real life stories out there that need to be told. I don’t need to write down a single novel idea ever again for as long as I live.
3. In your bio you've mentioned how you are a workaholic when it comes to your writing. You DO produce a lot of work in a relatively short time. Good stuff, I might add. This dedication to your writing--do you think this is a requirement all writers must have? Or is it just a quirk of your own personality?
Writers and would-be writers have to ask themselves one very important question: Do I want to be a professional full-time writer or do I want to be a part timer? There’s no right or wrong here obviously. There are always going to be those full-timers who work all the time who will barely eek out an existence, and those who write only one or two books in their lives who win Pulitzers. You never can tell. But to be honest, almost no one ever succeeded in this business by doing it half assed. In Hemingway terminology you have to “bite the nail” every day. There’s always going to be the “John Locke’s” of the indie world and the James Fry’s of the major pub’d world who hit homeruns more or less on their first try out (Ok
4. Apparently you have an agent who has bought into the world of ebooks and epublishing hook, line, and sinker. Is this unusual? And are you happy with the results so far?
Ironically that agent quit the agenting business and went into e-book publishing. I am pleased with what she’s done in negotiating my contracts with the Stone Inks, even though at first I was entirely ignorant to the e-book process and what’s been happening. When I originally signed, I thought, I’ll never make a dime from this. Then a few months later I was selling more books than Harlan Coben. Go figure. But like anything else, the success if cyclical. But I have to say, sales are still steady. It all resulted in a major deal with Thomas & Mercer who bought out my back list and two new books. And who could ask for anything more?

5. So many writers of noir/hardboiled, both male and female, are taking the female POV role for their main characters. In a word----why? Whatever happened to the Mickey Spillane characters of the world?

Nice loaded question BR and you know what? I’m gonna take the bait. Well, the answer is this: women read. Men don’t. Plus it’s fun living inside a woman for a change, 28 day cycle and all. Women are far more dominant in today’s society than in previous decades. Ok, I know I’ll catch a rash of shit for that statement, but there are simply some hot, sexy, bad ass women out there who can truly fuck you up if you get rough with them and then fuck you to death if you are nice to them. Not to push my own work, but that’s where I came up with my character Ava “Spike” Harrison of CONCRETE PEARL. Hot, sexy, smart, and able to kick your ass in a New York minute, Spike is entirely independent and self-assured, even if she is entirely up against it in the plot-driven thriller. Ok, how’s that for some shameless advertising?

6. I've asked this to a number of European writers. So I'll ask the same question to you; Writing styles; do you see any similarities or differences when comparing European noir/hard boiled to American noir/hard boiled? For instance the subject of humor has
come up. British writers think they put more humor in their writing. True? False? Maybe? What are your thoughts?

I don’t know. Not only don’t I spend time comparing them (the writing school prof’s do that), I don’t get to read a whole of them simply because I don’t get to read as much as I want to these days. I do read Max Frisch’s stuff over and over again (he’s Swiss and German), may the Lord rest his soul. I love Peter Robinson. I’m really pumped to see how well Russel D. McLean is doing as a young noir up and comer and I’ve blurbed titles for ’s Richard Godwin. Let’s face it, the Brits and the Europeans have always been ahead of the curve when it comes sex, humor, and just not being pent up in your panties. Remember Monty Python???? But so much of the beauty of noir and hard-boiled fiction lies in its regionalism, it’s sometimes hard to categorize anyone into something like, Well, he’s a Brit so he writes funnier than say some dude from like Charlie Huston who is actually very funny but dark as hell, or a brooder from NYC like Andrew Vachss. And then there’s Zeltserman who is but not as as Parker, and Zandri is even if he doesn’t live there full-time anymore. I actually have a new book in the quirky Dick Moonlight series coming out from Thomas & Mercer takes mostly takes place in  Florence, Italy because I spend so much time there now and the regional effects have had a major impact upon me as a writer. Anyway, I’m entirely sure I offered up a fucked up convoluted answer. Bu the simple answer to this question is this: True…False…Maybe…and All of the Above.
Vincent Zandri is good.  Very good.  You need to find him and read his books.  You won't be disappointed.
Posted by B.R. Stateham at 11:05 AM