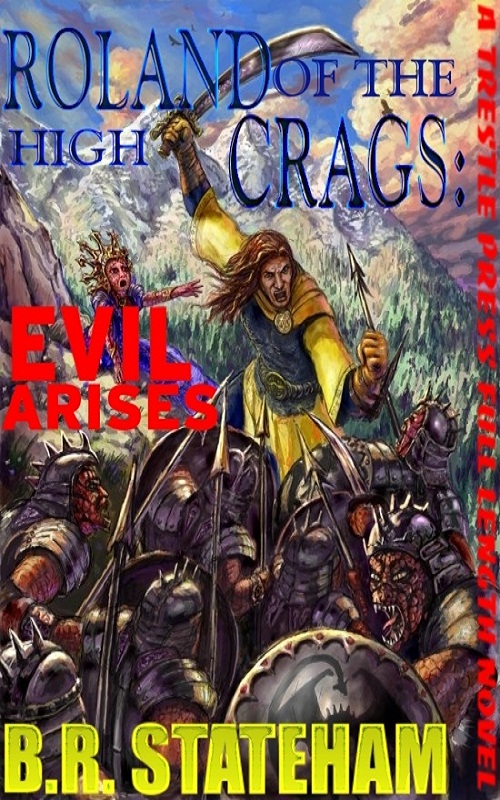 Screw it.  I was going to write today's blog about the Problem with Prologues.  But . . . in reality, that's not the problem that's bugging me. It's a symptom.  But not the source.  Here's the real issure yanking my chain.

I've got a character by the name of Roland of the High Crags.  He's a warrior-monk who happens to be a wizard.  He's the typical heroic character usually found in most epic fantasy novels. He's loyal, brave, incredibly daring, with a sense of humor. But more than that . . . In my opinion the guy has a far, far more complex character to him.  He's got strengths and he's got his weaknesses. And it is his one major weakness, which is his sudden plunge into blinding rage against those who would do evil things, which makes him interesting. And he faces characters, both good and bad, who are just as complex as he is.

The problem is this;  I created this fantasy character to write a series . . . a long series . . . featuring him and a few of the characters he meets in his adventures.  I wanted to create a fantasy series that ultimate postulates the idea that Magic is just another name for Science.  Writing the first book of the series I fell into wonderful quandary of thinking about Time travel, Multiple Universes, and possibly meeting one's self from out of the distant Past and the far Future.

But no one has read the first novel of the series (Roland of the High Crags: Evil Arises.  See the right hand column of this page and find the book).  So how do you write a series when no one reads it?  How do you continue to write a series and generate ZERO INTEREST from any lit agent or book publisher who works in this genre?  Why not just move on . . . forget Roland and his adventures . . . and go on to something else.

That's the rub.  The conundrum.  The kink in the grand scheme of things.  I'm just too damn stubborn to set Roland aside.   Roland deserves an audience (hell . . . for that matter, ALL the characters I've come with need to find an audience of their own!)  Yeah, I know . . . I know.  There are all kinds of reasons on why Roland has not taken off.  One of them being that perhaps . . . just perhaps . . . the writing is atrocious and the writer himself is a talentless hack.

But, I read this stuff.  Regularly.  I know what's in the market these days.  I can live with the charge of being a talentless hack.  Sort of . . .

So, for your entertainment, I thought I'd share the open few pages of the prologue from book two of the series.  Book two is called, Roland of the High Crags: Treacherous Brethren.

Know your enemy, my son.
Respect his skill; admire his cunning.
For the Dragon was built
For War.
-From the Book of St. Albans-

They hung in the clear blue winter’s sky like two glistening jewels.  Two dragons.  One a Winged Beastie, her giant bat-wings stretched out to the fullest, riding the thermal drafts of the rugged forest hills like some dreaded Dark Lord.  Her wingspan was a good fifty feet.  Her body, a charcoal gray color, with its long serpentine neck and equally long horned tail delicately balancing her in her flight, sat in the sky as if she was a natural part of it.  She was a fire-breather.  An old warrior.  Supremely confident and master of the skies.
Her rider, strapped in the heavy saddle just in front of the Beastie’s forward shoulders, had wrapped himself in a heavy cloak to keep the biting cold at bay.  The air was frigid cold.  Winter’s harsh grip had taken hold of the land and would not let go for another six months. Snuggled close to his body was the heavy looking crossbow so favored by King Dragons.  A weapon of immense power and range and very deadly in the hands of a marksman.  And something else was held close to him underneath the cloak.  Something important.
So important it required him to keep his crossbow strung and notched.
Two dragons riding the empty winds in maleficent grandeur.  Terrible to behold.
Harbingers of Destiny.
And I?
Once a Bretan warrior-monk and accomplished wizard, now condemned and hunted by my brothers and all humanity, I rode in the saddle of my fierce Cedric high above and behind the unsuspecting Dragons.  Cedric was a Huygens-bred Great Wing.  A beast much resembling the smaller, but equally dangerous, Ferril Hawks which populates the forests and mountains of the High Kanris.  But bigger, much bigger, and far more deadly.  A powerful bird.  Capable of carrying me and my weapons of war high into the skies to hunt Winged Beasties and their masters.
Friend.
Confidant.
Ally.
This was my Cedric. One does not own a Great Wing.  Neither bird nor man is the other’s master.  To fight the ravages of the Dragon,  man and bird must unite in a common cause.  They must blend into a well honed weapon with one partner knowing what the other will do in the heat of battle even before the other knows himself.  Cedric and I had fought the dragon for decades.  We knew each other’s soul as if it was our own.
Neither of us could believe a Winged Beastie and King Dragon rode the cold blue skies of the Northern Hill Country.  Yet there they were.  Both radiating from their souls a sense of boredom and being lost at the same time.  I sensed their half-hearted attempts to search the forests below for something they expected to find.  They were on a mission.  They were lost yet they were near to where they should be.  Given time they would find what they sought. They would deliver the dispatches the dragon clansman clutched beneath his cloak tightly to his chest.

A Story That Never Wants To End

Jeez, Louise!  Its been a long time since I've written something in here.  But that's the iffy thing about blog writing.  Especially for a writer (a good writer, or a bad one, or one totally pedestrian in nature.  It doesn't matter).   Coming up with something to write about  . . . on top of ALL the other writing you're supposed to be doing . . . gets to be a real drain on the imagination.

Or to put it more crudely;  it becomes a major pain in the ass.

But a topic hit me this morning that's worthy of a blog.  Maybe even worthy of a comment or two, depending of course, on whether there is anyone out there to comment on.  I doubt anyone is left who used to read this blog (all two of you).  Ah well, here goes anyway.

The subject of today's blog is;  A Story That Never Wants To End.

Here's the background you need to know.  A few weeks ago an idea came along for a short story featuring a rather unique character.  A combo of a Perry Mason lawyer and a Charlie Chan detective.  But a character with a definite 'odd' affinity for the strange and ghostly.  And . . . maybe . . . somewhat of a question of his gender.

The guy's name is Maurice.  He's a lawyer.  A lawyer who talks to ghosts.  In fact, it turns out a number of his 'clients' are ghosts.  Souls who have suffered through a violent end of their lives coming back as ghosts to 'hire' Maurice in an attempt to bring the perpatrators of the crimes to their long deserved rewards.  In the stories I hoped to throw in a court seen, ala Perry Mason, to give it some color.  And that, dear readers, is the rub . . .

The story refuses to wrap up into a tidy short story conclusion.  It keeps going on and on and on.  We're well past the short story limits.  With no end in sight.  So now . . . dammit! . . . it appears as if I have ANOTHER novel to write featuring ANOTHER character I'd like to get to know better!  I've got all the commitment and stick-to-it-tivness of a bowl of grape jello.  Ideas and characters just keep popping into my head and distracting me all the time.

Ah, well.  Thought I'd share the opening few paragraps with this character. Maurice is the name . . . as is the title of the story.  Tell me what you think.


Flipping the Zippo lighter open he thumbed the old relic into life and lifted the bright flame to the end of the cigarette.
And paused . . .
A bright pink Caddy convertible slid into the No Parking Zone as if it belonged there and quietly came to a halt.  A big battleship of a car, with high tail fins in back and a spread of metal across the front hood big enough to be the landing deck of a Nimetz-class aircraft carrier.  Hot pink. Freshly polished . . . with white vinyl seats.  The white so intense he thought about lifting a hand up to shade the glare from his eyes.
One big sonofabitch of a car.
Had to be a '59 Caddy convertible. Looked just like the one he remembered his grandmother had way back when he was six or seven.  Yet it looked as if it just rolled off a showroom floor.  But as if the car wasn't enough to gawk at, the guy sitting behind the wheel was . . . was . . . unreal.
At first the thought of Charlie Chan.  White three-piece suit.  Perfectly tailored.  Very expensive material.  Hung on the guy's frame like a million dollars.  Not even a smidgeon of dirt anywhere to be seen on the white.  With white loafers.  Glistening white loafers.  But instead of a white derby sitting directly atop the man's head there was, instead, a wide brimmed white fedora.  The complexion of the guy suggesting oriental origins.  Or maybe not.  Maybe Egyptian.  Or Romano. Definitely pudgy around the midsection. Obviously the guy enjoyed his groceries. But . . . you really couldn't call him fat.  Not yet.  No . . . this wasn't a Charlie Chan.  Charlie Chan was a Hawaiian-Chinese homicide detective based out of .  A fictional character concocted by a writer from out of the 1930's.   This guy . . . this guy, as he rolled out from behind the massively wide steering wheel of the car and reached into the back seat to extract a rather expensive looking leather briefcase, along with an odd looking twisted black ebony shillelagh-like cane, was real. 'Bout . . . maybe six foot.  'Bout , maybe on the bathroom scales.  With just the suggestion of double chins beginning to thicken.
Not Hawaiian.  Nor Chinese. Not anyone from the . This guy had the greenest/yellow eyes he had ever seen and a smile that seemed to burst out from somewhere deep within. A smile that could warm up the frozen heart of a Spanish Inquisitor standing in a dungeon cell directly dead center on the North Pole.
Posted by B.R. Stateham at 11:46 AM No comments: