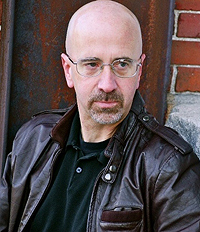 Been gone a while, I know.  Computer problems. Amazing, really.  An old fart like me remembers when there weren't computers in the house or at every turn of the hand.  Seemed like I lived a perfectly happy life back then.  But now, with computers as intinsic in our lives as a good roll of toilet paper is, to be denied access to the computer you have all your stuff stored on . . . well  . . . it almost makes you homicidal.

But the technology is fixed.  And the world continues to, more or less, revolve at its normal pace.

Today we begin a little adventure into the Badlands.  I've asked a few friends of mine to put down on paper their thoughts on why it's important to create a believable bad guy.  I suspect a bad guy (or woman . . . let's not get picky here) may be more important for the reader to accept that the good guy.  Making both the hero and the villain human . . . with strengths as well as with weaknesses . . . translates into a more interesting story.

Let's face it . . . there are a lot of us who actually root for the villain (depending on the qualities of the villany, of course).  A good bad guy kinda demands grudging respect from the reader.

So, first up in the batting box to discuss the concept is Allan Leverone.  He knows a thing or two about writing bad guys.  Read . . . make a comment . . . let's get a conversation started.

To be compelling, fiction requires conflict.

Everybody knows that. It’s so obvious that it’s kind of a cliché, and in genre fiction, conflict is even more essential because it almost always fuels the story. Without conflict, you would be left with endless description, pointless dialogue, and lots of frustrated readers.

In setting up that conflict, most writers intuitively understand that they’re going to need a strong protagonist. Genre readers are unlikely to accept three hundred fifty pages of story involving a wishy-washy dude who can’t decide what to have for dinner or how to respond to the asshole who just pulled a knife on him.

That’s not to say the protagonist has to be perfect; in fact, just the opposite is true. The hero of the story has to have some faults or she risks becoming a joke, a caricature of a human being. Nobody’s perfect, as I endlessly demonstrate to my wife, and a hero who is will not ring true to any reader paying attention.

Once that happens, as an author you’re done. You’ve lost the reader, probably for good.

I think most writers get that. Where some trip up, though, whether because they don’t believe it’s as important,  or simply don’t take the time required to do it, is in constructing an antagonist that is real and believable as well.

A strong bad guy. A frightening and believable one.

In my opinion, the most critical aspect of hooking the reader, of making her want to keep turning the pages when it’s midnight and she has to get up at six a.m. for work but can’t turn off the lights yet because she just simply has to know what’s going to happen, is the believability of the antagonist.

Who the hell is this jerk causing so much trouble and heartache for Our Hero? What makes him tick? Why is he such a bad, bad guy?

When I think of cardboard antagonists, I invariably picture those evil megalomaniacs who populate so many spy and superhero movies. You know them, those super-rich assholes who crave destruction for seemingly no reason other than that they’re just Really Bad People.

That doesn’t work for me, either as a moviegoer, as a reader, or as an author. Cartoon-character bad guys serve to limit the believability of the story, often to the point where as a reader I’m not able to suspend disbelief enough to fully immerse myself in it.

Don’t get me wrong. I can accept the most outlandish premise, and I believe most readers can as well. I’ve written novels and novellas involving time traveling outlaws, resurrected dead people, all kinds of criminals, and assorted and sundry riff-raff and backstabbers. Many of them are the kind of people who only exist in our nightmares, and yet they’re believable (I hope) because they act on motivations that are understandable, if repellent.

Milo Cain, the antagonist in my brand-new dark thriller, MR.MIDNIGHT, is as repugnant a human being as you will find in modern fiction (at least, that was my goal in writing him). But I challenge you to read the book without coming away with, if nothing else, an understanding of why he is the way he is, and how he got there. If I did my job properly, you might also find that deep down inside, you have a twinge of sympathy for him, even though you don’t like yourself for it.

To me, that’s often the difference between a so-so read and a great read – the quality of the antagonist. Is he someone I can understand as well as root against? If so, in my opinion the author has done her job. She’s given me well-rounded characters and thus a story I can lose myself in. She’s already gone a long way toward winning me over as a reader.

So don’t skimp. Take the time to populate your story with characters that will fuel conflict in a way the reader finds believable and credible. You’ll reap the rewards of that extra effort down the line, both in terms of sales and positive reviews.