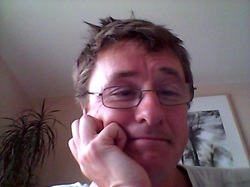 Ian Ayris.  House-husband, professional counselor, writer or really quirky British crime stories.  Emphasis quirky.
Ian is another one of those up-and-coming writers of crime fiction, British style.  God knows why I seem to know so many of them.  Maybe it's because I like their brand of crime and humor.  Maybe it's because I'm cruising the 'Net too much and run across guys like this and strike up a conversation.  Maybe it's because one bad penny (me) attracts other bad pennies (not that I'm saying your bad, Ian.  You're 'bad' in a good way!  I mean to say  . . . oh, what the hell).  Whatever it is, I'm damn glad I know the guy.  He, along with the other Brits I know, are some fine writers worthy of attention.  Not only that, they're good men to know.
He has a novel coming out in March called Abide With Me.  Two school chums who grew up together in the same rough, hard neighborhood that seems to be a universal motif all over the world.  Poignant.  Powerful.  The first, I predict, of a number of excellent novels to come out of this man's imagination.

And you get to meet the guy before he turns into a super star. Say!  We may be making history here!!
I thought I would ask him a few questions--you know, throw him into a hard wooden chair; aim a 1000 watt flood light into his face.  Maybe use a rubber-hose on him when he started to clam up.  I mean. . . what the hell.  We're friends!  And in the end, what are friends for but to give them a friendly third-degree every now and then.
So here we go;

1. You have a novel coming out. Tell us a little about it.

Well, short of repeating the blurb . . . here's the blurb . . .'3rd May 1975. Eight year old John watches his beloved West Ham win the cup, whilst at the same time, Kenny tumbles out the house opposite, blood all over his face.


Fourteen years later, both boys' childhoods ripped apart in the broken
streets of London's East End, John and Kenny find themselves frontin
up local gangster, Ronnie Swordfish.
John's got a lifetime of hurt to put right – for him and for Kenny.