How to start a novel 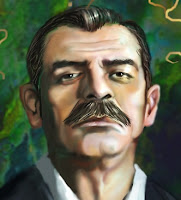 The idea just came to me.  Out of the blue . . . like most of my ideas do.  Not so much an idea as an image.  The image of a dead cowboy lying face down in a residential intersection.  First that image, and then a few others came rattling in just behind it.  Several images crowding into the brain all at once, and there it was.  The first chapter of a new Turner Hahn/Frank Morales novel.

The cowboy;  blue jeans, western long sleeve shirt, boots caked in cow shot, heavy leather chaps covering his thighs.  A big but battered looking Stetson hat lying on the hot street pavement right beside him.  Dead as dead can get with a .44 Magnum drilled right through the man's heart.

The problem is . . . the man is lying on the pavement of a residential section of a major city.  Miles and miles away from the nearest farm or ranch.

So the first idea of how to start a new novel is place.  But I've got to fill in the details first.  And most important of all . . . I've got to figure out how in hell to solve a murder.

Right now I haven't a frack'en clue how it'll come out.

So take a look at the first chapter of the fourth Turner Hahn/Frank Morales novel, Two to Worry About.


He stepped out into the bright light of the early afternoon soon and slipped on a pair of expensive aviator's shades. Standing in the doorway of the small taco shop he eyed his immediate surroundings before moving.  A quiet moment of careful observation before acting. A trait he had learned from long experience of deliberately, or not so deliberately, walking into a puddle of deep shit in his line of work.  In front of him the four lanes of the was a dull roar of its usual heavy traffic at this time of the day.  Trucks, busses, cabs . . . everything . . .  except a traffic cop, could be found on the Van Pelt at a quarter past on a Tuesday. On either side of the door leading into the small hole in the wall taco shop, the mini-mall contained a large liquor store on his right and a loan company to his left.  At the corner of the block, to his right, was a gas station.

Directly in front of him his new acquisition. A fully restored  '67 Olds 442 convertible, fire
engine red with freshly installed white vinyl interior, sat at the curb. In a bucket seat was his red haired genetic monster for a partner sitting with one arm resting an elbow on the door while his massive paw of a hand gripped the Olds' windshield, fingers drumming irritably in the process.


He couldn't help it.  The grin exploded across his features before he could catch it.  A big smirk of a boyish grin flashed across his thin lips as he looked at the ugly kisser of his friend and partner.


Frank Morales was, and there was no polite way to say this, just fuckin' big.  Even sitting in bucket seat of the Olds didn't help him look any smaller than a parked Russian tank setting atop a squashed industrial boiler.  Frank was, like him, a nudge over six foot three in height.  But unlike his relatively modest 258 pounds sitting on a relatively firm athletic skeleton, Frank weighed . . . easily. . . a good hundred pounds heavier.  With no neck.  But with short, stringy carrot colored red hair which absolutely refused to cooperate with a comb or hair spray.  The guy had arms on him as thick as the cement trusses holding up an interstate highway bridge.  Hands as big a snow shovels.  Frank had that kind of face which was unforgettable.  Hard to explain.  But completely unforgettable once burned into someone's memory. 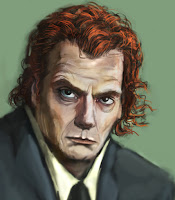 Frank's head swiveled somehow on those massive shoulders and he gave his partner a frown just as Turner tossed him the bag of tacos.  Walking around the front of the car the better looking of the two detectives slid in behind the wheel, closed the door, and leaned forward to start the car.


"Did you get anything for yourself?"


The corners of Frank's mouth twitched . . . his odd little way of silent laughter . . . as he nodded and reached inside the bag for a taco.  Turner glanced over his left shoulder, eyed the flow of traffic passing by until a gap miraculously appeared, and then rolled the big but elegant looking Muscle Car out into the traffic lane and accelerated rapidly.  The top was down.  The heat of the sun felt good.  The early evening daylight was still bright and clear.  And they were headed for the first squawk of the day.


The city's South Side Precinct of the Metropolitan Police Department was the largest of the six precincts.  The precinct was five miles wide and eight miles deep.  Forty square miles. Figuring, on the average, 17 blocks per city mile, it didn't take long to figure out the precinct was big.  For that forty square miles the precinct had, on each shift, eight pairs of patrol officers working in tandem and six detectives.  A total of 22 men to cover 40 square miles of territory.


Or to look at it another way. The city's population averaged 520 per square mile.  South Side precinct was an area of forty square miles.  Twenty thousand, eight hundred people lived in the South Side.  With only twenty two officers, per shift, keeping the chaos from boiling over into a certified disaster.


In the metropolitan area of the city were four other smaller cities with their respective police departments.  All told, the urban area of the city and its surroundings contained a population of roughly 2.5 million people.  Not as big as or LA.  Certainly nothing like a or .  But big enough.  With its own particular set of troubles.


By in the evening, just two and a half hours after the shift started, the patrolmen were tied up doing other things.  So when the call came in there was a cowboy . . . an honest to god genuine cowboy . . . lying dead in the middle of the intersection of Roach and Pine streets, the desk sergeant routed the call to Turner and Frank.


Of course the two had to investigate.  Who wouldn't want to go out and stare at a dead cowboy lying face down in the street?
Posted by B.R. Stateham at 10:17 AM No comments: