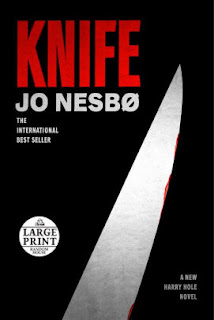 Okay, folks . . . I'm just going to come right out and say it. If you are a fan of a writer, and thus a fan of the main character the writer has created, the last thing in the world you want is to see is the writer you like basically killing off his main character.

This is what Jo Nesbo is trying to do to Harry Hole. Jo Nesbo is the writer. Harry Hole is the police detective. Norwegian dark noir, for those of you who haven't discovered him  . . . or Nordic crime literature in general. And I must warn you if you are thinking about discovering this line of mysteries on your own. 'Dark' doesn't quite describe the depths of horror you will find yourself swimming through. Up there in the snow countries like Norway and Sweden . . . when it's time to murder someone in fiction . . .it gets grim and devilishly cleaver in a hurry.

Most of the time I like that. The deeper it becomes devilishly clever, the better I like it.

In Nesbo's latest called The Knife, the real murder committed is his effort to kill off his main character. To be frank, the first two chapters is a horror trying to get through. A horror not in the sense of blood and violence committed on an intended victim. But the horror of seeing a writer describe his alcoholic hero in terms so damning, it makes a reader wonder if the writer has finally become disgusted with his character and wants to get rid of him.

In the Harry Hole series, the police detective is an alcoholic. An alcoholic who knows he's an alcoholic and doesn't like himself for it. Okay, that's bad enough . . . another fracken' police/detective character who is an alcoholic. As if we haven't seen that kind of stereotype before. Over and over and over again. But in Harry's situation, we don't exactly know WHY he is such a sloppy drunk so addictive to his booze.

And he shouldn't be. The guy's got looks, intelligence, and a knack for finding the bad guys. And a woman who loves him dearly. So why is this guy such a booze-clown? And why does the author paint a picture of him so despicable in the novel you just want to slam the book shut and throw it into the trash?

I'll be truthful . . . I haven't finished the book yet. I stopped at about chapter two and almost threw it into to the trash. But no . . . I'm going to go back and finish it. But I am not a happy camper. Why did the novel start out this way?