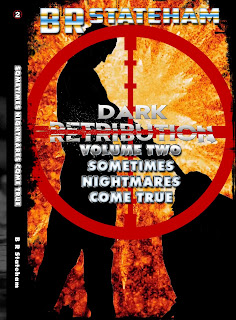 And so it continues. This hope, this desire, to see a character of mine by the name of Smitty become better known.

Smitty, as you may or may not know, is a hit man. But, more than that. He's a hit man slowly changing, or converting, himself into something else. Call it becoming a private detective. Or maybe, more like a crusading vigilante. Whatever you decide on his image, he is slowly weening himself out of the hit man-for-hire persona and into something else.

Still dark. Still a bit scary. Still relentless. But definitely morphing into something else.

First came the novel, Dark Retribution: Smitty's Calling Card (look to your right to see it). Coming out in September is the second offering in the series, a ten-short story and one band new novella called Dark Retribution, Volume II: Sometimes Nightmares Come True. This volume of short stories explains why and how Smitty became Smitty. I'll make a confession here; frankly, I think the very first short story in the collection is the best story I have ever written. But there are a few other gems in there that should capture your attention.

My publisher/editor friend came up with the idea of using a cover that will automatically alert the reader it's the Smitty series. Each overall view of the image is similar. But look closely and you see the subtle differences. I think it's a brilliant idea.

Compare the two covers and tell me what you think.
Posted by B.R. Stateham at 9:37 AM No comments:

Rebuliding the series; Roland of the High Crags 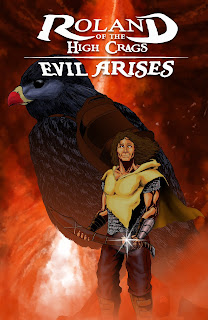 The continuing saga of my not-so-illustrious-writing career. Next up on the agenda is a revamping of my fantasy saga, Roland of the High Crags. You know the story if you've been around on this blog before.

A human-warrior-wizard is asked by a dying dragon baron (these dragons are humanoid in physiology) to take his last remaining kinsman, a dragon princess of about seven or eight, and save her from certain death. The catch . . . as there is always a catch in most novels . . . is the child is not only a child. She is a weapon. A weapon designed by the Dragon Dark Gods to destroy all of Mankind.  But the monk knows what she is. And there is the crux of the whole series.  How do you turn a weapon designed to kill you against those who created the weapon to begin with?

The original version came out some years ago. Ten years, maybe? I don't remember. But it has grown and expanded considerably since the beginning. It has expanded, in word count, from about 72,000 words almost up to 102,000 words. Book One is called, Roland of the High Crags: Evil Arises.

But here's the whammy. Do I self-publish . . . again? Or do I find a small indie publisher who will take a chance with me? Forget the Big Publishers. I have no name, no success, and no representation for any of them to take notice. And, of course, since the first volume has been published, they will not be interested in republishing.

So be it. That's the way the world rumbles.

Using a different artist on this revamping. Above is a semi-finished version of the front cover. It too needs a few corrections, but it basically what you get if you buy the book. Eventually.

To paraphrase a Shakespearean quote; Oh, what a wicked will we weave, when we . . . become a goddamn writer.
Posted by B.R. Stateham at 10:05 AM 2 comments: