Aiden Thorn talking about Brit crime in general, and Urban Decay in particular

There's a young up-and-coming writer  in Britain by the name of Aiden Thorn. We've become acquaintances and admirers of each other's writing, if not outright friends altogether.  Anyway, he asked if he could share some thoughts in my blob and rummage over the idea of Brit crime writing in general, as well as a few words about his latest collection of crime stories out called Urban Decay.

Absolutely, buddy.  I was curious to hear his thoughts about the influences of American hard boiled/noir writing and it affected a Brit and his writing.  So sit back and enjoy.

Somehow I’ve managed to carve out a reputation as a writer from the wonder underground movement that’s been termed ‘Brit Grit.’ I often see myself referred to in reviews or on blogs as, ‘Brit Grit writer, Aidan Thorn.’ It’s a label I’m extremely proud of, and why wouldn’t I be? By association it puts me in the same bracket as some of my favourite writers working in the indie scene today. The likes of Paul D Brazill, Gareth Spark, Darren Sant and many more, top talent that only get a miniscule slice of the recognition they deserve.

What I find interesting is that I’ve found myself batched in with this great company, when in fact most, if not all, of my early literary influences were American. And, do you know what, I haven’t checked but I reckon that’s probably the case for a lot of the writers that people associate with the ‘Brit Grit’ scene (can we call it a scene, are there enough of us for it to be a scene – fuck it, I’m calling it a scene).  It’s pretty clear when you read the likes of Chris Leek (a great British based writer) that he’s influences are heavily American, I think the same can often be said of Gareth Spark – two great writers, who write tales that make characters not just of the players but their settings too. With others the influence might not be quite so apparent, Sant’s voice is routed in northern England, but at the same time, just look at his PI Potter book, Moonchild’s Sin (seriously, do it’s a good read!) to find a man clearly inspired by the hardboiled characters from across the pond – it’s just told with Sant’s uniquely British voice. Where an American PI would be taking meetings in diners and sports bars, Sant has his leading character operating out of an office above a Fish ‘n’ Chip shop.

I reckon that influence is always there in the background and I guess it always will be with so much of what we consume as entertainment hailing from there.

Anyone that’s seen anything I’ve said about writing before will know I’m a huge George Pelecanos fan, for me that man can do no wrong. When I started to write I tried, unsuccessfully, to copy his voice. Thankfully, I found my own in the end, but he’ll always have an influence on what I write. So will the likes of , Leonard, Lehane, Block etc… What I like about these guys is they tell extraordinary stories, big stories, about people that live little lives. People on the edge of society, the shoe salesman, the bar owner, the café cook. And I think that’s largely what those who write in the Brit Grit scene (I’m going with it now, it’s definitely a scene!) tend to do too. Read Nick Quantrill’s Bang Bang You’re Dead or Paul Brazill’s Guns of Brixton, great stories about pretty un-extraordinary people told with heart and realism that make the reader engage fully in what’s happening. And, don’t get me wrong I don’t think American writer’s invented that type of writing but I do think they’re bloody good at it and certainly opened my eyes to something I find a lot more interesting to read, and to write, than police procedurals and serial killer thrillers - crime stories with the human spirit at their core.

For me what makes this type of story work, whether it’s from a British writer, or our US cousins, is that the writer seems to be drawing on their own experiences to make it tick. I’m not suggesting they’re all hardened criminals or PI’s with drinking problems and inner monologs playing in their heads. No, they write the details that make the story come alive from their own experiences and interests. Regardless of writer, or US passion for certain things always comes across. Music often plays a key role, the mere mention of a song can create an ambience in the readers head, and it can tell you, British voice or American. Straight away. A beer label, a bar top, a piece of clothing and car brand all help to create an atmosphere too, the beauty of a noir book is you always feel like the writer has experienced these subtle scene builders for themselves. Sports also often provide a fantastic backdrop to build an atmosphere around a story. I recently read Tom Pitts’ Knuckleball, I have no idea about baseball but that didn’t matter, the detail around the sport just served to make the story more believable, more real. A British writer of this genre will often use football (or soccer as you call it) in the background, it simply serves to set the scene, put you the reader into the environment in which the story unfolds.

When I wrote my first collection, CriminalThoughts, I knew I wanted to write with a 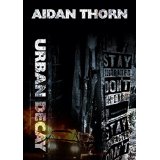 distinctly British voice, I’m pretty sure I achieved that, but I also wanted stories that would resonate with the sort of audience that I was for a book, the fan of a Lawrence Block Matt Scudder book, for example. For my second collection, Urban Decay, I wanted to put together a collection of stories that I’d be proud to put in front of my favourite writers, Pelecanos, Lehane, Spark, Sant etc… the fact that Darren Sant approached me about publishing it under his (and Craig Douglas’) Grit Fiction venture went someway to proving I’d achieved that. The fact that Gareth Spark wrote me a fantastic foreward added to that… The fact that I’ve already picked up a couple of nice reviews from across the pond I hope also shows I’m going the right direction with those idols of mine that made me want to write in the first place. So, thank-you for great gritty fiction, this particular Brit Gritter is and always will be a massive fan.

Getting away with Murder

Yep.  That's the whole bases for my Turner Hahn/Frank Morales stories.  People trying to get away with murder.


As you already know, I like a good mystery wrapped up in a series of What Ifs, stuffed inside Complex Puzzles, and gift wrapped with a bunch of ribbons called Red Herrings.  The more complex the puzzle, the merrier it is.  I like to read about smart people, diabolical people, the crazies of the world, who think they can plan plan the perfect murder and get away with it.

Equally, I've always looked for the character(s) who could match the bad guys, brain cell for brain cell, in cracking the case and hauling in the bad guy in the process.  That's why I've always been fond of Sherlock Holmes (both the books and the movies).  That's why all the books in my library (as pitiful as it is) are character-driven books/series that fit this give parameter of mine.

That's why I invented Turner Hahn and Frank Morales.  Not only are they smart and talented, but their unique characters each to their own personalities.  Separately they are each damn good a being a homicide detective.  Combined in a team and they are, for me . . . and I hope to a growing fan base . . . pleasing to follow along with in their investigations.

So I have a new collection of short stories out featuring these two.  Some old stories from the past, mixed in with a few new stories no one have seen yet.  The new offering is called MURDER IS OUR BUSINESS.  Eight short stories that display their unique talents and their proclivity at being good friends.
\
Yes.  Not only do I like a good whodunit.  But I like a good whodunit that have characters in it who have a sense of humor . . . as dry or as morbid as can be.  I've always believed in the old art of Shakespearean story telling that you mix in a little blood letting with a little black humor on an almost  3-to-1 ratio.  Three horrors balanced by one guffaw.

Real life is like that.  Horror (or the Mundane) mixed with Humor.  This 3-to-1 formula is what makes us Human.  We endure the mundane and horror around us . . . we concoct our own brand of humor to help us cope.


So . . . if you haven't discovered Turner Hahn and Frank Morales, here's your chance.  Eight stories, along with some artwork included, is the perfect 'Primer' for you to get to know these two. (Which you can click on over on the right hand column, upper most selection.)

If you find you like the short stories, well . . . by all means! . . . try some of their novels.   You'll find those in the right hand column as well.

I do hope you like a trip down twisting mazes and dark streets.