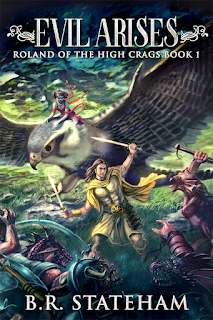 Well, as you can see in the book-list column to the right, the second book of the Roland of The High Crags series is out. After a long wait, it finally has seen the light of day. Now--what's interesting to me--is book one of the series has suddenly found an audience. After being out for a few months, suddenly the book has shot up into the rarefied air of Amazon ratings to where it could almost be considered being a fantasy hit.

What I am waiting to see is if there is a kind of tag-team match where the readers who liked the first book bleeds off into the second book and continues to follow the series along. As of yet, that hasn't happened.

Book One is called Evil Arises.

(both can be found in the book-list to your right)

Quickly sketching a summation of both books goes like this. For over a millennia, two sentient species have been raging war against each other. One human--one dragon. Humanity came first and established suzerainty over the entire world. The humanoid-shaped Great Dragon came next. And with them came their dark dragon gods who promised they would one day rise up and destroy mankind. And this would be accomplished through the guidance and leadership of five mythical creatures called The Five Princesses,or sometimes referred to as The Five Sisters.

Four of the sisters have come and gone. The Fifth Sister is alive. But is now only a small child. Not until she reaches adulthood will she fulfill the gods ultimate role; that being the destruction of humanity itself. And as a child, she is quite vulnerable to the ravages of both man and dragon.

I am not going to say more about the story line--leaving that up to you to find out for yourself. But I do have a couple of comments left.

I am currently into writing the third book of the series, entitled Desperate Pawns.  And so, here is comment number one;

Does the child live or die?

As a child she is just a child. An innocent creature, albeit filled with unbelievable magic she really doesn't know how to control. But still only a child. She does not become evil until she reaches adulthood. Or maybe not. Her Fate is yet undecided.Those who are trying to save her believe neither in Fate, nor her twin-sister, Destiny. So do you take the chance and hope you can guide the child to adulthood and change dragon prophecy of her becoming evil? Or do you remove her from the scene now, and in doing so, remove dragon prophecy altogether.

My second comment is more a statement. I had planned to make this a 10-volume series. Ten books. But maybe not. It's taken almost six years (maybe more!) to get just two volumes in print. And although I believe ten story lines are there for the taking, I'm not too sure there is enough time to get them done.

I mean, come on! I'm a writer. I've got hundreds of characters, with their own stories, popping around in my head and demanding to be written. So, being human, the concept of Time is finite when it comes to living a life. So who do I pick and choose to free?

Yes, it is indeed an interesting conundrum.

Don't Forget To Add Some Humor 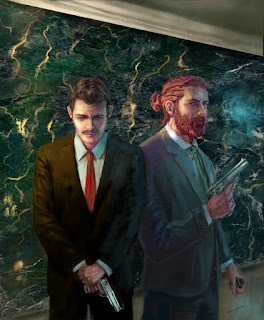 As you may or may not know, I like to write mystery novels. Most of the time, these novels drift toward the dark side of genuine whodunits--the classical novels of the past which offered up deep puzzles to solve filled lots of red-herrings, false clues, multiple suspects, and dead bodies splayed out across the landscape like some madman's midnight garden of murder.

Okay. Dark and grim. But what about inserting a little humor into these nightmares? Not the aching belly-laughs of slapstick comedy. But maybe the kind of humor that might only make you smile suddenly and without warning. Or the kind of humor that offers up a chuckle or two as you tag along with a couple of characters who interact with each other in unpredictable ways. Humor designed to make either the protagonist or the antagonist more human. More interesting to the reader.

Below is the opening few paragraphs of another Turner Hahn/Frank Morales police-procedural novel (yes, I know; I talk about these two characters far to often. I actually DO write about other characters.) The novel will be called Two To Worry About. It'll be the fifth book in the series. And you'll instantly note I've broken one of the cardinal rules about writing. Never open a book fiction novel about the weather (this will lead into another discussion about The Rules of Writing Fiction at a later date).

Here's the opening. Two characters interacting with each other. See if it elicits a smile and stretches your
lips back just a little bit. And consider the thought about how the opening suggests how the entire novel is going to be like.

It was raining. And no, pilgrim—not just the polite, early summer rain most prefer to see. This was a hot summer’s rain. A late August thunderstorm with jagged flashes of billion-kilowatt lightning strokes and teeth-rattling claps of thunder. It was like watching the one-eyed Odin opening the flood gates in Valhalla and stepping back and laughing hysterically at what was about to come. It was a biblical deluge straight off the fingertips of a pissed-off Old Testament god.

It was raining. And it wasn’t going to let up until it was damn good and ready.

Standing on the top step of the apartment building, eyeing the rain and the growing Venice-like canals beginning to build in the streets, I was beginning to think maybe I should add a WWII Army amphibious duck to my collection of Muscle Cars from the 60’s through the 90’s. But the cautious opinion changed to a firm commitment when my partner-in-crime stepped up on the top step with me and shook off the rain like a wet husky shaking the water out of his furry coat.

“Just got the word, buddy. There’s a report out a house boat sank on the Patterson bypass near 123rd street. Sixteen people and two monkeys had to be rescued by fire department rescue helicopters. The city’s Emergency Preparedness Office said no one should drive their cars unless they have diving gear in the car with them. You do have life-preservers and a couple of pairs of aqua-lungs in the Shelby GT's trunk, don’t you?”

I half turned and eyed Frank and grunted noncommittally.

Frank thinks he’s a comedian. And most of the time he can be with his odd, twisted sense of humor. But hard to imagine a six-foot-four, three hundred pound red-headed genetic freak to be humorous. Scary as hell, oh yeah. But funny? His brand of humor—and even the man himself—are acquired tastes. You either like the guy. Or you don’t. I happen to like the guy. Most of the time.

But maybe not today.