You're a writer.  Stories pop into your head.  But exactly . . . just how do they pop into your head?  Where do they come from?  The ideas . . . do they come fully formed?  Complete?  Or are they tiny little icky hatch lings that require nourishment so they can grow and blossom out into fully developed, gleaming examples of pure intellectual thought.


I dunno.  They come.  They go.  Some have a sticky backing so that, when they pop up, they slam into the brain like a brick thrown through a plate glass window and stick forever.  Some are covered in slimy green gooey stuff.  They hit the brain pane, seem a bit interesting, and then slide off into into the subconscious void never to be seen or heard from again.

Les Edgerton, a writer of some considerable talent, and one who . . . let's face it . . . has a rather colorful background to draw from, has a new one out called The Genuine, Imitation, Plastic Kidnapping.  He was gracious enough to write up a little piece explaining this very phenomena on how one gets a handle on writing a novel.  Thought you might be interested looking it over.

This has long been my favorite of all the books I’ve written. It began as a short story of the same name that The South Carolina Review published years ago. Soon after that, I wrote this novel, based on the short story and then I wrote a screenplay of the same title which was named a finalist in both the Writer’s Guild and Best of Austin competitions.

I wrote it because I simply went back to my initial roots as a writer. To those days as a kid when I wrote simply to entertain and get a laugh from readers. Some of the books I’ve written, while fun to write, were drop-dead serious and Kidnapping was simply a return to the joy of writing and watching the reader’s face for signs of a smile or a laugh. And, I was fortunate to gain those kinds of responses with this book.

The germ of the idea for it came when I was in perhaps the dullest period of my life. When I was selling life insurance and trying to become what’s called “a solid citizen.” Yuch… One of the first things I learned from my boss was a term insurance folks call “the million dollars on the kitchen table.” It refers to the mindset that most folks have when they’re being sold a policy. The million dollar policy is just an abstract figure and it’s a goal for salesmen to move as many of those as possible. The guy sitting across from them usually doesn’t have a clue what a million dollars actually is. It’s just a number to them. When you can convey the image of an actual million dollars sitting on the kitchen table to them rather than just an abstract figure, that’s when you make the sale.

Well, I started thinking about that in terms of a kidnapping. What I came up with was that when the ‘nappers snatch the wife and ask for a million dollars, it’s just a number and the husband is fully prepared to pay it and get wifey back. But… and there’s the big BUT I came up with that signaled the birth of this novel—when the guy withdraws the million dollars from his bank and it’s sitting on the kitchen table just before it gets stuffed into the suitcase or whatever—it suddenly becomes very real to him. It’s no longer an abstract number—it’s a MILLION FUCKING DOLLARS! And, that’s when he calls the cops and the fibbies in on the deal. Suddenly, he realizes just how much a million bucks really is and while he of course dearly loves his snatched loved one… he also realizes how much he also dearly loves his frickin’ million dollars. Maybe even a tech more than he really loves his wife… Ask any FBI agent—I think they’ll attest to this happening. Of course, hubby denies this to himself. He’ll justify calling in the law because he now thinks that they have the best chance of getting the wife back. In his heart of hearts, he knows that if he just paid the dough he’d get the wife back most likely. Only it’s his heart of hearts that he studiously avoids going to during this period. 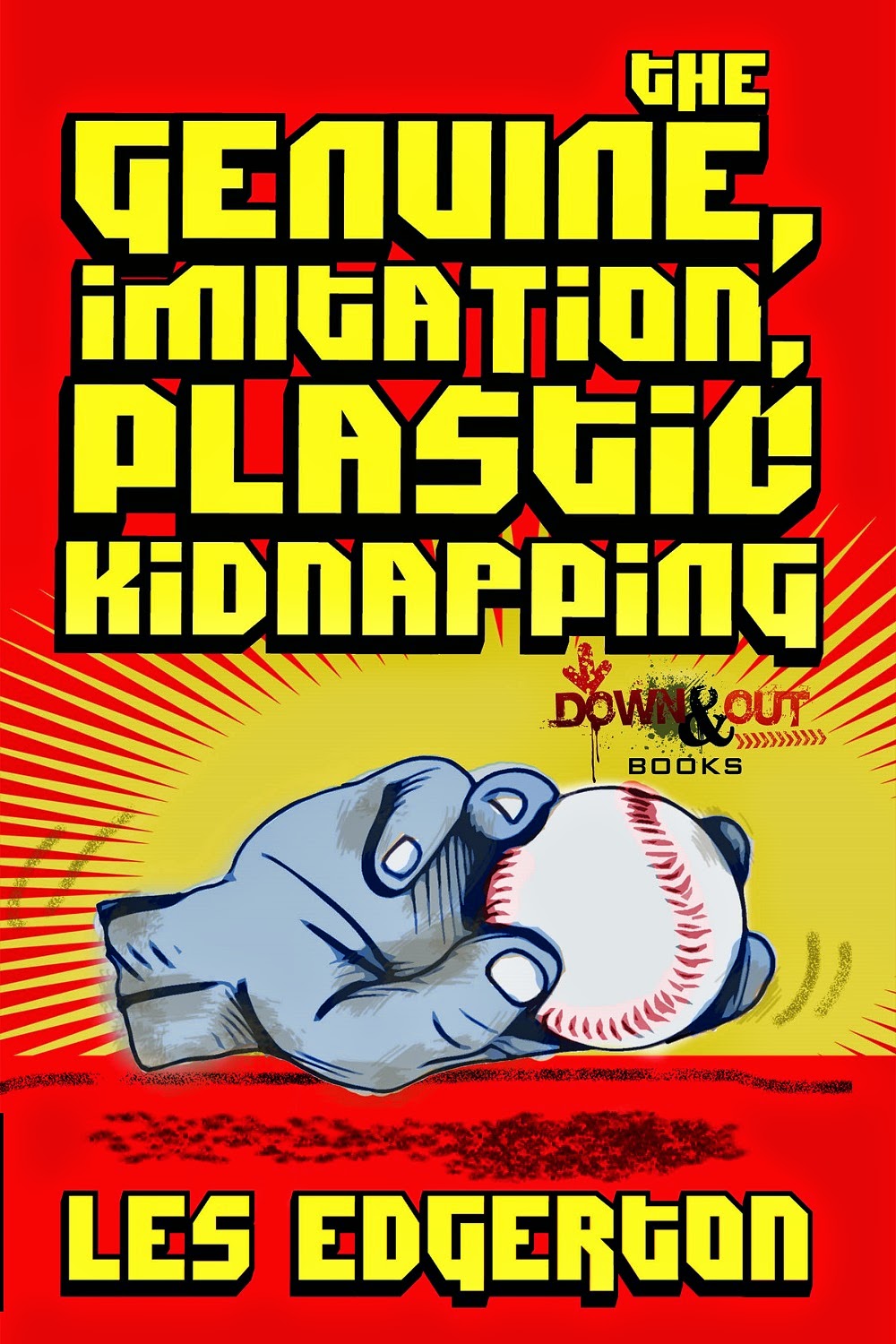 natures most of us don’t ever want to admit. And, it’s this realization that my character Tommy LeClerc realizes. Although he’s a smarmy little worm, with little redeeming characteristics, Tommy actually has an insight which many people, lots smarter than he is, can never have. And, his insight is that when the million bucks is exposed on the kitchen table, the guy suddenly places its importance up there with retrieving his wife. But… and this is the Big But that’s illuminating—if, instead of a wife he’s giving the million up for it happened to be his own hand… his outlook changes. If it’s his meathook that’s at stake—the hand that picks his nose, whacks off his trouser worm, hits his nine-iron with… he ain’t gonna dick around and chance losing that appendage by calling in the fibbies… And that’s a fairly profound insight…

So, while this is a comic novel, at the heart of it is a very serious truth.

The other reason I had so much fun writing this is that I got to include a character who was very real in my own life. Cat. Cat was a call girl I lived with for a couple of years in New Orleans and I think her character is accurately portrayed on the page. I used her real name in the novel, btw. Like the woman in the novel, Cat was sold by her mother to Carlos Marcello, the Godfather in New Orleans, when she was nine and she made the same poor career changing move—she made the mistake of turning 12 and which was much too old for his tastes and so he kicked her out and she went down to the French Quarters and was a rare survivor. Her history in Kidnapping is precisely her own real-life history with him and with me. Even though Cat tried to kill me several times—shot at me twice, tried to stab me thrice, tried to run over me in Fat City with her car once, sicced her killer brother on me and some other things—she was the most memorable person I’ve ever been involved with. I didn’t love her, but she sure was exciting to be around. And, although she was never involved in a kidnapping—at least not when I was with her—her book counterpart acted pretty much the way I think she would have under the same circumstances. Except for the kidnapping, everything Pete and Cat went through in the novel I went through with the same Cat in real life, including the scene with her, her black friend Jackie, me and the trick in the hotel gig. Who happened to be a real-life person who’s very famous and whose real name I couldn’t use, alas.

One other note. When I wrote this, I was co-writing a screenplay with Steve Duncan who happens to be a black guy. I ran the scene in the black bar with Cat pretending to have Tourettes and shouting out racial epithets to see if he thought it was racist. Not in the least, Steve told me. It’s just plain funny stuff.

Anyway, there’s some of the background stuff about this novel I thought you might find interesting. I’m working on a sequel to it at the moment and hope to finish it by the end of the year. I find I’m laughing out loud at the scenes I’m writing, so I’m pretty sure folks will like this one as well. Hope so!
Posted by B.R. Stateham at 9:52 AM 1 comment: