'Retribution' to be finished soon. Promise.

Okay . . . I know;  I've been writing the first Smitty novel, (the full length 'No shit, Maynard!') novel now for about a year.  Off and on.  Stops and Starts.  A page here. . . a paragraph there.
But I'm gonna finish it sometime before the end of Summer.  No . . . really, dammit!  No kidding!  Sometime before Summer!

The biggest problem is how to write an action novel that's over 200 pages in length.  Yeah, we ALL know and love Jason Bourne and others of his ilk . . . and they're in stories 700 pages and longer.  But Good Golly, Gabby.  Writing a character like Smitty for 700 pages or more?!  You gotta be kidding me.

Still . . . I'm pushing for 300 pages.  Lots of action; a genuine plot . . . believable characters.  The works.  And Smitty at his nastiest.  So I thought I'd give you chapter one (again.  I think I've done this some time back), just to give you a taste of what's coming.  Actually, blowing my own horn here, I think it's one of the best openings for a novel . . . EVER!  But that's just me puffing out hot wind.  Take it for what its worth.  So here goes.  Enjoy. 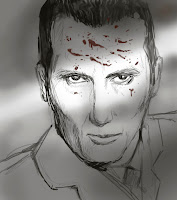 Okay, I'll confess.  Several people have told me that 'Smitty,' my would be--ever lovable, dark eyed assassin who has a streak of Puritan honesty to him--would make wonderful fodder for an action adventure movie.

Sure, I bought some books, looked at some 'how-to' videos.  I've got a germ of an idea on how it should be done.  Apparently the basic component is to remember that you are writing for a VISUAL medium . . . so you're basically giving directions at the cameraman on what they should be seeing in the camera lenses.  Yet. . . not writing n so much detail the movie director isn't allowed to use HIS imagination to fill out each scene with his own imagination.

And then there's the problem of the flow of the movie; meaning the flow from one scene to another has to make sense, and shouldn't have inexplicable 'breaks' between scenes which don't make sense.

And then there's this thing about writing a 'spec' script versus a 'shooting' script.

Apparently the only way to learn is to begin.  Write the damn thing, the proverbial first draft, and see where it takes you.  Okay . . . okay . . . okay.  I'm doing that.  Writing the damn thing.  I thought I might share with you the introductory sequence. . . the one where the main character (Smitty) and the main conundrum are introduced.

Tell me what you think.

EXT. SHOT--A busy city street filled with traffic shrouded in a fog-like downpour.
CUT TO: Black CTS Cadillac moving over rain filled streets. The car is weaving expertly in and out of slow moving traffic.

CUT TO: A second view, the Caddy's tail lights, lighting up the early evening light as it shows a right turn signal.

CUT TO: Hands, wearing black leather gloves, gripping the     steering the leather steering wheel. One hand moves     from the wheel and punches the ON button on the car's radio. Softly over the radio we hear the music of Depeche Mode's A Pain That I'm Used To.

CUT TO: The dark eyes of the driver turns to his left     and sees a man holding an umbrella in one hand and the     hand of a small girl in the other.  The man is trying     to hold the umbrella over the small girl as they hurry through the rain down the deserted sidewalk to the      entrance apartment building.

CUT TO: A booth sitting in front of a large plate glass   window.  Outside the pub the city sidewalk is filled   with rapidly moving pedestrians.  City traffic on the     streets is moving stop and go action.  Sitting at the table is a dressed in all black.  He looks nervous.       Agitated.  In front sitting on the booth's table are three empty glasses.  A fourth is sitting by his hands.  Hands that are fidgeting nervously.

CUT TO: Same bar. Different angel. A man is sitting       alone
in a booth. In front of him is a large piece of
pie and cup of coffee. He's dressed casual sport
coat, solid color shirt with no tie.  We see his
hands, arms, upper torso, and the lower portion of       his jaw but nothing more.  His booth is beside a       large plate glass window that looks out onto the same       busy street. He casually eats his pie slowly,
occasionally turning his head to glance out at
the passing pedestrians.

As the fork with the last piece of pie rises up
to his face, the arm's motion stops at the mid-
way point when the form of a man in dark
clothing slips past the window.  We SEE the
lower portion of the man's head half turn to
glance at the passing stranger.

CUT TO:  The bar's entrance door opening and a compact,
trim man dressed in a tailored suit enters the premises.  There is a suggestion of a predator, of      coiled and ready menace ready to explode, in the man's physical form.  He sees the agitated man sitting in a      booth and makes his way to him.

Just as he turns to head toward the booth a figure,
face UNSEEN, tries to step past the man standing
in front of the entrance. The two accidentally
collide. There's an awkward dance as each man tries
not to the touch the other. We HEAR an "Excuse me,"
coming from the man trying to depart just before
the man slips out of the entrance and disappears
into the pedestrian traffic.