A writer's mind is filled with the voices of his characters. For some writers, only a voice or two wants to speak. For others . . . hundreds of voices and not enough time (nor intellect) to endure all. So I confess, I was not surprised in the least when one voice between my ears elbowed his way to the front of the queue and offered up a challenge.

The voice (character); A Greek warrior by the name of Heraclitus of Sparta.

The challenge:  Finish a novel started years earlier called Cold the Stars. And have the novel completed by the 1st of June. (why the 1st of June you say, cousin. A goal to have it done and hand it to a lit agent who will be attending a certain conference in the second week of June in Missouri. An agent who likes this kind of story telling)

The novel's plot: An alternate-universe creation of the conflict between Carthage and Rome. The Carthaginian Wars. But this one with witches and warlocks and dark magic and power-made rulers and noble families, on both sides of the conflict, who vie for the honor of becoming the Supreme Ruler of all.

And each facing an upstart Greek mercenary who threatens to undue all their cherished plans.

The tome is not just another fantasy novel found everyday in the paperback racks of your favorite bookstore. No, no . . . not so pedestrian in nature this time, bubba. This one has the cadence and flow of words and sentence structures which suggests the style and flow of Homer's The Iliad or The Odyssey. Poetic prose, in other words. (and I'm here to tell you its a bitch to write, sister). But, when it works, it's hypnotic when you read it.

Let me give you a taste so you can decide for yourself if I've hit the mark or not. This is chapter one of the novel.

Cold the stars rule sitting on their thrones high.  Cold the night when skies clear and winds, like poisonous wraiths sneaking from mountain peaks distant, come down to haunt souls damned.  And colder still, my brother, when in darkness sit and wait for the bloody victors of battle lost to find you shivering in bushes thorned. 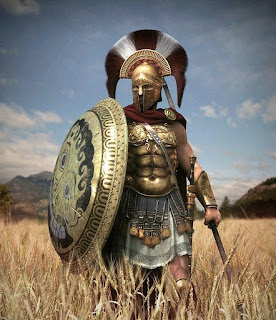 While bright orb in sky shone the battle raged.  Horses neighed.  Men screamed in agony and in triumph.  Trumpets blared and the hooves of steel-clad steeds thundered back and for across the plains wide and bloody.  The clash of shields bronze between opposing factions was like a sea of glistening metal.  Sunlight shot its bright arrows down upon the masses, each arrow reflecting heavenward with outrageous horror.  The din of battle rings yet in ears of those who survived.  The horrors of war fill the eyes of the silently huddling few who survived the slaughter.
A survivor of war terrible he was.  Squatting in the darkness, back against cold stone of mountain wall, shield leaning over shoulder bloody and scarred, he sat in the frigid cold shivering and grim.  Hunger gnawed at his stomach with the fangs of famished wolves.  From a dozen places on his arms and thighs minor wounds bloody and terrible had dried and caked in dirt stirred from the field of doom.  At his heels lay the bronze helm with its bright red horsehair plume dented and bloody—a trophy of a day filled with death and valor.
War, for the fool who loses, is a terrible dream to endure.  For those who survived the day the night comes with its own unspeakable horrors.  Below him in the distant pass he heard the screams of dying men and the laughter of victorious horsemen rendering such deadly deeds.  Ride they did, these horsemen Roman from far across the seas, through the night with their spears sharp and bloody hunting for the woeful few who had fled for their lives.  Roman arms had won the day.  Roman death the prize for those who could not find a way to disappear into the night.  A Roman with the stentorian name of Gracchus came to these desert sands to impose Roman will and Roman power on once ancestors of mighty Greek heroes.  This day was theirs.  This battle won.  Their steel bloody and victorious.


But he---Heraclitus of Sparta—sat in the night and shivered in cold far from the ones who fled the field defeated and lost.  Neither lost nor defeated this peasant sat.  In dark eyes burned fires of rage.  In his stout heart was a thirst for revenge.  With shield covering his front and the wall of a mountain his back this bearded veteran of a hundred campaigns—this hammerer of metal and hot forge—this phalanx spear men of Alexander’s kin—sat in the darkness and dreamed of revenge sweet.  Dreamed of returning to terrible plains below and giving back the bloody favor the Romans so recently given him.
Yet this night he must endure; must survive in order to victory plan on the morn.  But in the night the stirring of sandals against stones.  The rattle of armor against cold rock.  The groans of men wounded and defeated stumbling in the night.  Rise this bearded warrior did.  Rise to stand with shield in hand and sword at the ready.  Donning helm red plumed he stood in the middle of narrow path and waited for those who might intrude on his loneliness.
They came.  Twenty ragged, discarded minions of battle lost.  Greek one and all. From distant Syracuse—from Athens high—from the rugged peaks of the Ionian shores. Dragging shields.  Dragging spears.  Dragging wounds bloody and grim.  A huddled mass of wounded men defeated and shamed.  Exhausted and condemned to death knowing. Yet desperate to live the sweet moments of an hour more.
But one in the lead of ragged flotsam lifts his eyes and sees the dark form of warrior standing before them.  Shield at the ready—sword resting in hand against thigh powerful.  A specter black of martial splendor!
“By the gods!  Look, comrades.  Look.  Ares himself has come to rescue us.”
“Or Hades come to claim his own,” someone in mass deep yelping.
Like water cold smashing against mountain firm—like ocean surf smashing against rocky beach—this harem of defeated souls recoiled from the blackened figure in front of them.  Some—those with wounds of lesser pain—gathered their arms and shields and stepped forward to shield their comrades.  Shield to shield they stood and faced the specter in the night.  And for their reward heard the deep rumble of amused laughter.
“Call me no fool of a god, Greek.  I—like you—bleed and breathe as a mortal.  I am Spartan.  Son of a Spartan.  Once of the Fifth Regiment of Hericles Prime.  Comrades mine—like yours—lie strewn across battle field below like the shafts of broken spears.”
“Spartan, we must hurry," cried one of the wounded men before him. "Behind us comes Roman horse bent upon our destruction.  We tarry here in this confining space and die we all soon shall be.”
Again, in the night the rumble of deep voiced laughter.  But black specter lowers his shield and as closer he approaches wounded warriors grim.  Behind them the voices of horses approaching—of Roman voices yelling gleefully in the hunt.  Soon they would come thundering into this narrow path.  Spears flashing.  Swords dripping in blood.  Horses lathered from a hard day’s battle.
“Tell me true, brethren.  Wish you to survive this night or to die like slaves chained?  Quick!  Decide sure in the next moment for time we do not have to waiver!”
“To live!” three of the men with shields at the ready answered quickly and firmly.
“Aye.  Live you shall if you do as I say.  Those of you still live with a flame for revenge burning in your souls will stand with me.  The rest of you pass.  Leave . . .follow narrow path up into the high country and may the gods go with you.”
The voice firm.  The voice a rolling rumble of confidence supreme.  Of knowing.  An ointment of medicine sorely needed by those who stood in mass staring at creature dark and menacing.  To this lone creature’s surprise none detached themselves and left their comrades behind.  Instead they gathered themselves—gathered arms—gathered shields—straighten their lines.  Again, becoming fighting men waiting for commands.  Waiting for victory.
“Good,” specter black grunted nodding plumed helm.  “I and three others will stand here at the ready.  We will face approaching horsemen.  We will lure them into the trap the rest of you will spring upon Roman arrogance. Hide in the darkness on either side of this trail.  Wait for all the horsemen to pack themselves tightly. When the last horsemen rides in—attack!  Fall upon their flanks with spear and sword and cut them down.  Let no one escape.  Hear my words, warriors.  Do as I say and yet we may live to see tomorrow’s promise.  Now, who will stand with me?”
Three of the shields at the ready in front of the group stepped forward. Helms donned.  Shields at their sides.  Spears held in hands firm.  Marched they did toward black specter and took up positions on either side of creature dark.  The rest disappeared into the night.  Like ghosts murderous the warriors became a part of the darkness and began the wait of a trap certain spring.
A grim smile of pleasure stretched narrowly on lips dark of Heraclitus of Sparta.  Let Romans come.  Let them in their arrogance grand ride to their deaths.  War—horrible and bloody—was soon to ravage those who so recently ravaged him.