Oh, my goodness!  I'm a giddy as a junior high school-boy who's just kissed an honest-to-god girl for the first time.  Ever!  Today I get to present to you my interview with I.J. Parker. 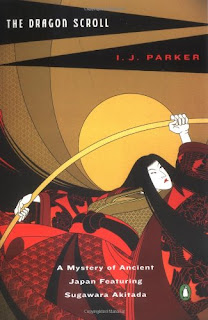 
Well let me put it to you this way . . . if you love historical-detectives, you know who I.J. Parker is.  She writes a series featuring Sugawara Akitada.  Ninth Century Japan.  Before the creation of the legendary samurai. . . or the geisha.  Akitada is a minor official in the Heian Era imperial court.  An honest and honorable man working along side corrupt court officials and scheming noblemen.


A man trapped in the rigid class system of his time, yet someone who has a genuine compassion for the lower classes as well as for his own.  And someone who expects . . . quietly demands . . . that every one is entitled to justice and a fair shake when times go bad.


I.J. is a retired college professor of English and Languages.  She is a strong personality whom I got to know in a web site called Crimespace.  From there we've voiced opinions and comments back and forth over several topics others have raised on various issues regarding mysteries, writing mysteries, and the publishing industry in general.  In the process developing a kind of long-distant friendship I've enjoyed immensely.


Coming up with six questions that didn't sound like a blubbering, clueless fan stumbling over his own tongue in an effort to impress one of his favorite writers, wasn't an easy task.  I tried.  That's all I can say.  I tried.


So without further blubbering, let's get to the interview.

1. An intellectual, a respected college professor; someone adept in languages. The question has to be asked . . . what circumstances compelled you to try your hand in writing crime fiction? I read in an earlier interview you mentioned the decision was an accident. While looking up some poetry from the ancient Japanese Heian Age you discovered Sugawara Akitada. But how did we go from poetry to crime?

I’ve read mysteries almost all my life. Teaching Sophomore English and a few literature courses can get old after many years. There came a time when I decided to try my hand at writing a mystery. I was a fan of Robert Van Gulik’s Judge Dee series already, having become absorbed in the culture of T’ang China, because the genre and his characters made time and place come alive. I had also recently studied Japanese literature while preparing a course in World Literature for our curriculum, and setting my novel in eleventh century Japan was a natural. The period was particularly rich in literary works. It wasn’t the poetry, though, that I based my decision on, but prose. The world’s first novel, Lady Murasaki’s GENJI was written during this time.

2. Your character, Sugawara Akitada, is a minor figure in the imperial government. What attracted you to this character? Why pick a bureaucrat for a hero over, say, a monk or a more heroic figure?

I needed a protagonist who would have access to the nobility as well as the commoners. The class system was extremely rigid then. Akitada is a rounded character. A hero would not have served me. Akitada has glaring faults, but he tries and he is a man with a great sense of justice. A monk might have worked, but it seemed to me that historical mysteries have entirely too many monks already. As for an action hero: Akitada is trained in swordfighting, and he is frequently in situations where he has to use this skill. 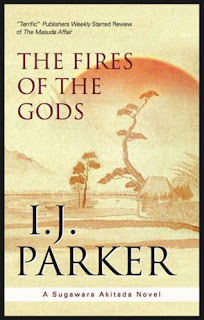 3. When you write your historical mysteries how important is it to weave in the political, social, cultural and mythological aspects of an ancient society into the story line?

When I start a new novel, I check the actual events during that year. Frequently, this provides interesting material, as in THE CONVICT’S SWORD, where a smallpox epidemic in Kyoto affects Akitada’s own family. My new novel weaves piracy on the Inland Sea into the plot. In ISLAND OF EXILES, an imperial prince is a prisoner because he tried to seize the succession, a fairly common occurrence in Heian times. As for social and cultural details: daily life was affected by customs, so they become a part of the narrative and of the characters’ view of the world. Mythology plays a small part also, though Akitada is an unbeliever in a time when people were intensely superstitious. His sidekick Tora sometimes represents that aspect.


4. You once said in an interview you had a vision of Sugawara Akitada, at the end of the series, as an old bitter man, alone and forgotten. Why such a terrible end to a honorable character?

Yes. In “Akitada’s First Case” and THE DRAGON SCROLL, you meet an Akitada who is filled with all sorts of idealistic notions. As time passes, he loses almost all of them. It stands to reason that a man who has dealt with crime and the corruption of the ruling class all of his life would become a cynical and disillusioned person in age. This sort of character change is just realism and not such a terrible thing. He will remain an honorable man.

5. In reading the Akitada novels I am constantly struck by the concepts of Order over Chaos. Of Intellect over Superstition. Of Law over Anarchy. Are these motifs that much of an interest to you?


A case of the chicken or the egg? I probably rely so heavily on these because that is part of my character. And so being a fan of mysteries may also come from that. There is little enough in modern literature that gives readers, young and old, any of the ideals to live up to that earlier generations found in their own reading. And yes, such concepts can become themes. The new Akitada novel (DEATH ON AN AUTUMN RIVER) deals with appearance vs. reality; people may not be as they appear and preconceptions about right and wrong may be dangerous.

The series is set to continue indefinitely at this point. I may, from time to time, also dabble in something else. A Japanese swashbuckler is possible. Also a set of short stories based on Hiroshige’s prints. And of course, THE HOLLOW REED trilogy is available for readers of historical fiction. Far back in my mind is a modern police procedural set in a small German town.
////
If you like a good mystery, you should take time to discover the Sugawara Akitada novels.  And you should notch I.J. Parker's name up on your list of favorite authors.  She's that good.
Posted by B.R. Stateham at 11:11 AM