Irritations and other irrational thoughts

Okay, something's bugging me. And I want you to put your two cents in (translation; I want your opinion). 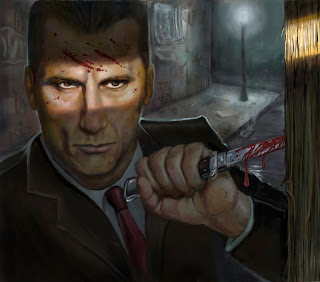 Last September I finished the first full-length Smitty novel entitled, Dark Retribution. Now, for those of you are not familiar with Smitty . . . think of a dark-eyed hit-man with a rigid set of code of conduct rules. A genuine killer who only hunts, and removes, bad guys.

I know, I know; it already sounds like a bad cliche.

But what's a cliche? It's an oft-quoted reality of life that continues in perpetuity. It's a cliche because it's true---only applied too often. Yes. Smitty is a hit-man. But he's a cliche only if he just mimics what other hit-man characters have already done.

But if he captures your attention and holds it until the bitter end . . . is he still a cliche?

Okay, this is what's bugging me. I finish the novel. I sent it in to a new publisher who specifically likes this genre. I thought the book would be a perfect fit. It was rejected. Why? Because he couldn't believe the set-up on why a hit-man would want to work with a cop in finding a serial killers. So this is what I want you to do. Read the first chapter. And then tell me if it pulls you into the story. Or, if it doesn't, tell me why it doesn't.

Convince me to change it. If it needs changing.