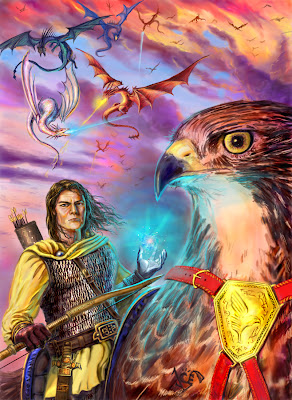 Imagination.
The 'What If Factor . . .'
An ingredient absolutely critical for a writer.  Pictured here is the new cover for the Fantasy short-story series I want to write featuring a character of mine called Roland of the High Crags.  Roland is a warrior, monk, and wizard.  Living in a world of dark parallel universes connected by a continum called The Netherworld.  Call it the After Life . . . call it an Alternate Dimension.  Call it Hell or Hades, if you want to.  But The Netherworld is where all immortal things exist.  Including concepts like Good and Evil and Magic.  And your Doppelgangers for a myriad of different universes.
Not just the simple Fantasy of formulaic repetition we seem to be stuck in these days in this genre.  What I have in mind is something that could be both highly adventurous and extremely creepy/horrible at the same time.
That's imagination.  Creating a world of complex values and sights and sounds and tastes never before encountered.  Or . . at least . . . rarely encountered.
Yet in so many genres I love this talent seems to be stilted, if not severely curtailed altogether.  It's as if writers today can't . . . or won't . . .allow their imaginations to soar.  To visualize something extraordinary.  Sure, sure . .. we get critics who will claim one author or another's vision as being brilliantly conceived.  But . . .  really?  Have you really read something recently that just fired up and exploded your five senses into a whole no realm of possibilities?
The above image is the creation of Javier and Jesus Carmona.  Two brothers living in and around Madrid, Spain.  Not profession just yet.  But their artist talent is right there with the best of them.  Their visualizations of my words and descriptions are fantastic to experience.  I specifically described to them what I wanted.  We had an interesting back-and-forth discussion over details.  And then the final product.  Marvelous!
I hope I can get them to work on an image I have for another character of mine.  The dark eye, cold hearted assassin named Smitty.  If I can describe specifically the image I have in mind that these two can render in their art . . . the image will be absolutely stunning!  And if it comes into reality, it will be a fabulous cover the continuation of the Call Me Smitty series I recently had going.
Imagination.
Find it. Mold it like clay in your mind.  Don't be afraid to use it in your writing.
Posted by B.R. Stateham at 1:14 PM