Today's blog I thought would play the role of the book reviewer.  Thought I'd look at some new stuff and some old stuff and throw my two cents into the mix.  God knows I don't read nearly as much as I did in my youth.  Call it old age; call it a lack of interest.  Call it an intense sense of being disappointed at the reading material out there.  I dunno.  Whatever you call it, I don't read nearly as much as I used to because, frankly, I find it hard to find an author who writes well enough to capture--and maintain--my interest.
However, that doesn't mean I've given up the reading habit.  I still crack open a book.  I still look for outstanding writing.  I remain optimistic.
First up on today's review is Daniel Silva's Portrait of a Spy.  Frankly, if you haven't discovered the Gabriel Allon series, where the hell have you been?  Allon is a Mossad (Israeli Intelligence) hit-man.  Silva created a character that you both grow to appreciate . . . and dread . . . whenever the game is afoot.  Allon's specialty is whacking terrorists.  His team of trained agents go all over the world looking for the bad guys and taking them out.  Usually very violently.
What makes the series excellent (there are I think, fourteen Allon novels) is this;  it smacks of real life.  Allon hides himself in Europe posing as a world-renown art restorer.  So you get to dive into the world of rare art AND international intrigue.  There are no fast cars, no incredible gadgets.  But there is some nifty tricks you learn about the spy trade. Really nifty.
Comes highly recommended by me.  I'd give it a 5 nine-millimeter rounds between the eyes for a rating. Next up is The Bitch by Les Edgerton.  Edgerton (whom I will be interviewing shortly) is one of those writers who takes American crime and doesn't try to paint it in any kind of  nonsensical romantic patina.  The novel is a hard edge look at 'The Bitch' the three-felonies-and-you're-out rule . . meaning you're behind bars for the rest of your life if you get caught.
The book is about an ex-con who has make choices.  None which, he wants to make at all.  Crime in all its unvarnished reality.  From a writer who has done a little time himself behind bars.  If you like to read harsh reality, this is the puppy for you.
This comes in as another 5 nine-millimeter rounds in the head rating. (My!  Ain't I the gory one today!!) 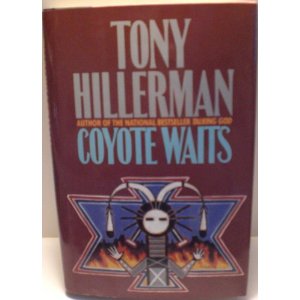 Next on the list is an oldie but a goodie.  Tony Hillerman's Coyote Waits.  Hillerman, no longer with us, by the way, wrote about the tribal police on the Navajo reservation down in the four-corners area of New Mexico.  That being said, what you are going to discover is a trip into Navajo mythology and culture.
The Navajo looks at the crime of murder with different eyes. Especially the reasons, or motives, why murder takes place at all.  Out in the desert country of New Mexico and Arizona the night holds monsters and dreams which affect us all.  Take for example, the coyote.  In their mythology the coyote is a trickster---sometimes in a humorous fashion---but more times than not, in quite evil formulations.  He is waiting in the dark for the foolish to find him  And when he is found rarely does anything good happen.
Tony Hillerman wrote at least  eighteen novels in this series featuring either/or, or both, his characters Jim Chee and Joe Leaphorn.  Both Navajo reservation sheriff officers.  Make an effort to discover, or re-discover, these novels.  You won't be disappointed.
I give this series not only the 5 nine-millimeter rounds, but the 9 mm Glock as well.  Yes.  They are that good.
There are more oldies out there I'd like to discuss.  Maybe later.  What I would like to find in some new writers to fall in love with.  If you have a recommendation, feel free to offer up their names.  I'll check'em out.
Posted by B.R. Stateham at 9:48 AM