What's Coming Up In The Near Future 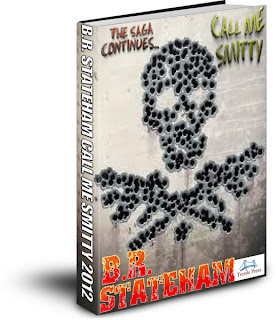 This is the new cover for the Call Me Smitty short-story series for 2012.  Suggested to the boss it'd be great if we could design a cover for the series that lasts the entire year, creating new ones with each passing year.
He agreed.  So we're gonna give it a shot.  In 2011 I wrote . . . more or less . . . something like twenty-three short stories and two novellas for the series.  I'm hoping to keep roughly that number going for 2012.  But there's no two ways about it . . . it's a killer grind for any writer.
Throw in a couple more short-story series to write, plus one to three full length novels, and your plate becomes a little full with projects.  Still. if I was organized, I could pull this off.  Ah, but that's the problem.  Being 'organized.'
But I do have two stories for the first issue (this would be issue no. 9 in the series) in 2012.  Lots of people have said they would like to see a little background history on Smitty.  Just how did he turn into the hit-man he became.  So okay.  Story number one for the new year is called First Kill.  Told in a kind of flashback manner.  With a kick in the pants ending.  Per Smitty, of course.
In no. 9 two more stories follow after "First Kill."  I like the three-story concept for this series.  I think the reader is getting a pretty good deal for his buck. 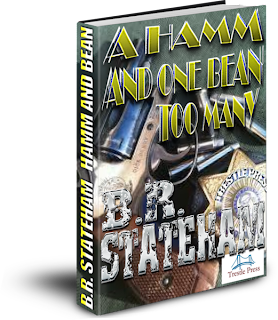 Speaking about 2012 the second installment of the Hamm & Bean series will be out soon.  I'm just finishing up the stories on that as we speak.  Let me tell you, pilgrim;  writing humor is a pain in the ass!  What have to ask yourself, "What is funny?"  Is funny for me the same as it is for you?  If I write a verbal form of slap-stick comedy, will the reader to mentally visualize it?
What's coming up is called, "Hamm It Up Some, Bean!"
Marissa Hamm and Mike Bean investigate what looks like an ordinary, typical homicide that should be easy to solve.  But nothing's easy for these two.

And just for the record, this series works best I think with two short stories  back-to-back in one installment.  Not only is humor hard to write.  But I sometimes think humor should be sipped in short doses.  Like medicine.  Too much of a good thing dulls the effects.

That's it for now.  Tomorrow, (Sat., January 14th)  I'll have a little announcement to make.  Something that might tickle your fancy.
Posted by B.R. Stateham at 10:43 AM