Writing and The Art of War 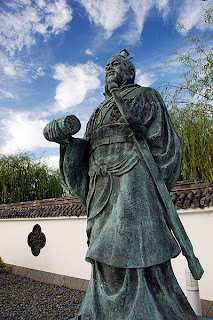 Sun Tzu. An ancient Chinese general who lived somewhere around 515 BC and served as a general in one of the many ancient Chinese armies fighting for dominance in that time period.  Wrote perhaps the most famous of all military treatise on waging war entitled, The Art of War.
(What, Eunice?  You bet we're going to war if I have eat another one of your meat loaf's for supper tonight.  Twenty one days of meatloaf is making me gag!  So put on your armor, wench!  En garde!)
Oh. . . . sorry about that.  Sometimes the missus and I have a difference of opinion.  About her 'cooking' if you know what I mean . .
But as I was saying, The Art of War . . .
What does a classical work about how to wage war and win battles have anything to do with writing, you ask.  Ah, dear pilgrim!  Everything!  For in truth The Art of War is not so much about actually fighting and marching and all that soldiery stuff (which, I admit, he does talk about that and which fascinates me).  It actually is more of a psychological study of both yourself and of your opponent.  And this is at the heart of the matter.
To be a GREAT writer you must know yourself--and that of the reader whom you are aiming your work toward.  You must know your writing strengths and weaknesses.  You must study the market and see what works and what doesn't.  You must dig deep within yourself and see if your abilities equal your desires to write well enough to succeed.
One of Sun Tzu's tenants is perhaps the most oft-quoted of all;
All warfare is based on deception.

Hence, when able to attack, we must seem unable;


when using our forces, we must seem inactive; when we


are near, we must make the enemy believe we are far away;


when far away, we must make him believe we are near.

How does this translate to writing the perfect Mystery?  The perfect Fantasy?  The perfect Romance?  When we're writing we should lay traps and intrigues for the reader to stumble into.  We should set up labyrinths where the readers is lulled into a false sense of security in thinking they can predict the outcome of the story.  Or knows three chapters before the end of the novel who the killer is.  Or who actually is in love with Hortense.

When we write we should present the obvious; yet fade away when it appears the denouement has arrived.  We should insert seemingly innocuous little details that, at first, appear to be of little significance only to later on realize they play a vital role in solving the conundrum.

If you have not read The Art of War I strongly urge you to do so.  Read it and convert its tenants into rules and guidelines you can use as writing techniques.   Don't become so religious about it that you MUST use every one.  The old general would chastise you for being so literal.  Flexibility, speed, a clear vision--those attributes he would stress the most.  Rigid adherence to rules he would not.

(Eunice! Not fair, dammit!  I'm encased in a knight's armor--and you're in a fraking Army tank!  One of us has a decidedly difference of opinion on what is the definition of a fair fight!)