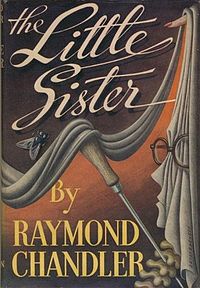 Here we are talking about Raymond Chandler again.  Yeah, yeah, I know; I said in my last blog that too many writers want to compare their literary genius with Chanedler's (No Shit!  This is Good Stuff!!) literary genius.  And doing so is a mistake.  A big mistake.
Still . . . .
Chandler wrote The Little Sister in about 1949.  Some of our college educated, over-rated, often pompous, and many times complete idiot 'experts', rate this novel as not one of Chandler's best.  Let's assume for arguement's sake that this time, and only this time, the college educated wig-wags are correct.  Maybe The Little Sister doesn't stand up to his Fairwll, My Lovely.  It doesn't matter--even when Chandler was struggling he wrote in a way that just floors you when you read it.   Take a look this--here's the opening paragraph of the book.  You'll see what I mean.
The pebbled glass door panel is lettered in baked black paint: PHILLIP MARLOWE--INVESTIGATIONS.  Is is a reasonably shabby door at the end of a reasonably shabby corrider in the sort of building that was new about the year the all-tile bathroom became the basis of civilization.  The door is locked, but next to it is another door with the same legend which is not locked.  Come on it--there's nobody in here but me and big bluebottle fly.  But not if your from Manhattan, Kansas.
Okay, I admit:  the crack about Manhattan, Kansas makes me grin every time I read it.   I call myself a Kansan and any time The Little Apple is mentioned in any publication it's okay by me, sister.  But moving past that little point:  look at the fraken words!  The vivid mental pictures Chandler paints in your head!  Good golly, Gandolf!  The mental image of that all-tile bathroom brings back all kinds of memories to me!
And people.  Chandler had a way about describing people.  Listen to this:
She was wearing a brown tailor-made and from a strap over her shoulder hung one of those awkward looking shoulder bags that made you think of a Sister of Mercy taking first aid to the wounded.  On the smooth brown hair was a hat that had been taken from its mother too young.  She had no make up, no lipstick, and no jewelry.  The rimless glasses gave her that libriarian's look.
Maybe, just maybe, The Little Sister isn't Chandler's best.  But brother, on a bad day Chandler's words have a way of just making your head spin in admiration at a master spilling words all over a clean piece of paper.  His mediocre rates as the absolute best for many of today's so-called A-list writers.  The guy died in 1959.  Gone for fifty-two years.  Yet pick up one of his novels and you're wrapped up in it faster than you can snap your fingers.  That's brilliant writing.  That's a master craftsman talking to you.
That's why a lot of 'great' writers are eventually going to be forgotten. Their 'great' is only marginally good.  But Raymond Chandler and his novels are going to survive for a long, long, long time.
Posted by B.R. Stateham at 3:47 PM