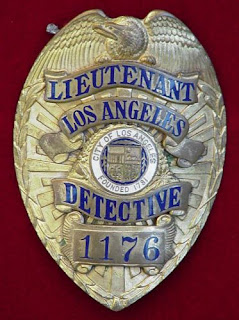 The depiction of cops in the hardboiled/noir genre has been littered with both the good and the bad.  For writers like Robert Parker, Dashiell Hammett, Raymond Chandler and many others, the cop has been less than honorable if not squarely placed in the enemy's camp.
For writers like Dell Shannon, Ed McBain, and others, the depiction of the working cop has been viewed thru a more sympathetic set of eyes.  The cops in police-procedural novels come across a potentially both.  Both good and bad.  Both three dimensional or nothing more than cardboard cut-outs.  Both either over worked or amazingly singularly-minded on solving just ONE case at a time.
A few years ago (I won't tell you how long . . . but when was Abraham Lincoln the President?)  I thought up creating two working cops. . . homicide detectives . . . and make them unique.  Make them three dimensional.  Good points and bad points.  Strength and weaknesses.   On top of that I thought I would make them something else not really sketched out fully in this genre;  actually give them two attributes rarely seen.
First I was going to make them true friends.  Partners in a precinct's homicide section.  Close friends who knew what the other was going to say before the other said it.  Make them odd.  Funny.  Watch them play pranks on each other as they goof around.  Make'em humane.  And at the same time as tough as the armor plate found on an M-1 Abrams tank.  Make them in such a way that the reader will recognize that each detective is absolutely great at his job.  But combined, they make for an unbeatable team.
The second thing I want to do is design two characters who had their own particular demons to fight--but neither had given up and became the dry, sullen pessimist drowning in a sea of self-imposed alcoholism.  The question was when I created these two was this;  in a grim world filled with blood, lies, deceit, and greed--could cops actually exist who were basically honest.  And basically optimistic?
And I wanted them to solve homicide cases that were complex, twisted, filled with lot's of classical red-herrings.  Not just one case, mind you.  But multiple cases.  All to be solved in a short amount of time.  This idea of multiple crimes has evolved somewhat.  Now I'm down to just two homicide cases that are not related in each book.  Two unrelated cases that are genuine head-scratchers is enough for a fan to read--and keep track of.
So with these thoughts in mind, this is how I came up with my characters, homicide detectives Turner Hahn and Frank Morales.  Each unique.  Each with their own personalities.  Their own weaknesses.  Each needing the other in order to become an unforgettable team.
I bring this all up because sometime in August of this year (2011)  Untreed Reads is going to come out with, A Taste of Old Revenge.  Two separate homicide cases.  One case stretching back more 60 years into the past.  A case that brings up old horrors from the past and a massive--yet brilliant--cover up.  The other stretching back to the First Gulf War and billions of dollars suddenly disappearing . . vanishing . . . in plain sight.
I don't know how successful this book is going to be.  But I'm convinced it paints Turner and Frank in a more complex and unique light.  It makes them more human.  More vulnerable.  And more believable.  In the end, I think that's what readers want the most.  Characters who are believable in situations that might be fantastic to contemplate on first thought,  but not cartoonish are so outrageous as not to be within the realm of possibility.
Cross your fingers, my friends.  Let's ride this roller coaster for as far as it will take us.
Posted by B.R. Stateham at 3:33 PM