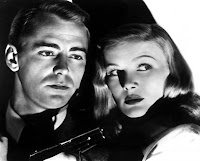 So the other day I was watching Turner Classics and fell into watching Alan Ladd, Veronica Lake and William Bendix in Dashiell Hammitt's 'The Glass Key.' Black and white photography. Lots of odd angles, dark shadows. Good stuff, Maynard.

Hard boiled film making at its best. Partially due, I suggest, because it was filmed way back when the majority of films were done in black and white. There's something about the medium of film work sans color that is just naturally made for noir/hardboiled material.

The shadows seem more menacing. The play of light across a person's face more distinct. It's like the absense of color automatically creates mood and innuendo. But when you throw in great actors and actresses, well brother . . . it can't get any better.

For years there's been critics who claim Veronica Lake wasn't much of an actress. Sorry. Wrong there, buddy. That face of her's--that long blond hair. The way she could deliver her lines in a monotone voice that wasn't quite so monotone. No, I say just the opposite; I think Vernoica Lake was a great actress for this genre. Tough--yet vulnerable.

Matched up with Alan Ladd and the two were a great combo. Ladd was the perfect tough guy. Smart, cool, tough as saddle leather. The epitome of what a tough gumshoe should be.