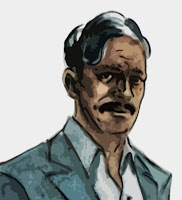 How do you write hardboiled/noir? First person--that is, through the eyes and in the voice of the main character as they live through the moment? Or in third person--becoming the all seeing, all knowing omnisicent voice that takes the reader by the hand and escorts them through the story.

It's an issue I still struggle with on a daily basis. In one series I tell the story through the eyes and voice of one of the characters: Turner Hahn. He's a cop. A cop who has his strengths and weaknesses. He's very bright--but he's not all knowing. Sometimes he and his partner misses clues. Doesn't interview the right witnesses. Ask's the wrong questions.

Another character I write is an accomplished assassin named Smitty. Here is the third-person voice; the all seeing observer who is privy to everyone's thoughts and words. You feel his confidence. You admire his skills. You anticipate what might happen next.

Both work. Both have their own advantages. But I'm confused.

First person gets you in the head of the characters. I mean--right down there in the mud and slime and body fluids. You smell what he smells. Feel the emotions he feels. See the gun come up and aim at you from out of a dark alley. It seems to me, when I think about it, that this is the perfect format for hardboiled/noir. You are there when they discover the piece of evidence that turns an entire case on top of its ears.

Yet taking the second route in telling a story--if done properly--can scare the hell out of a reader. You can set the reader up for traps and sudden surprises. You know what's coming as the writer. The reader doesn't. And I have to admit it's fun. Fun scaring the bejesus out of a reader. Throwing something at them that make's them sit up and yelp in delight or in dismay.

But which style is better? I haven't a clue.