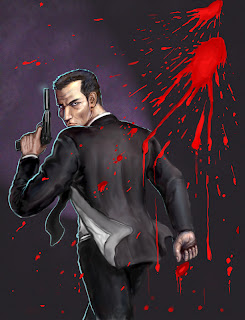 Three pieces of good news to share with you today.  First, let's talk about the artwork created by my friend, Javier Carmona.  I've been putting up on the blog the various modifications of a concept for a book cover featuring 'Smitty' my rather lovable (if you like to cuddle with a cold-bloodied killer) hitman.
The basic image came to mind a few weeks ago.  Popped up, uninvited like Smitty himself, unexpectedly but in full living color.  An image so strong I needed to find an artist whom I knew could concert words into images.  And someone I knew who had mentioned once he would like to get into the noir/hardboiled genre of artwork.  So Javier and I went through a series of modifications from the first offering to where we are at today.  As you can see, the latest version is quite striking.
The reason this image came into being is because of the idea I had of packaging half of the older Smitty stories (ten stories and two novellas, to be exact) into one anthology and then self-publish or find a publisher who would be willing to publish them.  After that I would continue to use the same cover for the short story installments I had been publishing earlier featuring Smitty.
Artwork, kids; artwork is important even epublishing.  It may not be THE deciding factor for a perspective buyer when purchasing their next read--but it is important enough to give them second thoughts if it looks like rank amateurs used crayons and super-glue to come up with an image. 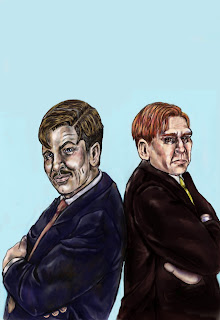 So . . . with that in mind, here's the second piece of art (and the second item of good news) that came to mind for the Turner Hahn/Frank Morales short stories I've accumulated over the last couple of years.
These two pose a problem, art wise.  Unlike Smitty whom I've tried diligently to give a general description (except for his riveting dark eyes), with Turner and Frank the descriptions have been far more specific.  Both Turner and Frank have an 'image' to portray.  Can't get around that.  They have both a physical and emotive set of descriptions which are pretty clearly iron clad.
Smitty comes and goes in the night.  He's more of a malevolent shadow whose features should be vaguely described so that each reader can fill in the details for themselves.  Turner and Frank, on the other hand, stand in the harsh light of judgement.  They are the hunters who must hunt the hunted.  They are viewed and judged more stringently.  Therefore their images must be more clearly defined.
Agy Wilson, an artist living up in Maine, worked with me on creating the Turner/Frank cover.  She is normally a children's illustrator but I kinda persuaded her to try her hand at this one cover.  From what she has said it sounds like she thoroughly enjoyed herself while she worked on this.
So mission accomplished; Turner and Franks standing back-to-back and looking like the smart-ass cops they very much are in their books and stories.
Both covers I was going to use to  begin the two series again.  But . . .
Here's News Flash number Three which puts a HOLD on my plans.  Got word day before yesterday that super lit-agent Chip MacGregor and his staff love my work (his words, not mine)!  Loved it and wanted me to send them any completed material I had for them to review.  So I did . . . and put my other plans on hold until I hear back from them.
I have to admit I'm both excited and a nervous wreck at the same time.  Excited at the thought that an agent with the credentials of Chip has, along with his staff, thinks I'm worthy enough of representation (possibly).  After years of wandering through the wastelands to finally come to this junction in my life in finding an agent who loves my work.  Really?!
Of course I'm nervous as hell.  There's nothing agreed upon.  Nothing has been set in stone.  There's no guarantees even if Chip represents me  anything of mine would be sold.  Hell, the market out there is huge!  And there are thousands of writers striving to succeed.  No guarantees, buddy!  No guarantees at all.
But on the other hand . . . potentially it could be a hell of a ride if certain breaks fall in certain ways.  So why not sit back and take the 'wait and see' attitude?  Either way, representation or not, I'll still write my stories.
And in my mind's eye imagine funky, eye-catching book covers.
Posted by B.R. Stateham at 11:47 AM