The incomparable John Carter of Mars 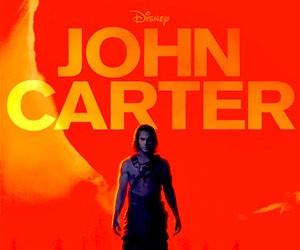 It's nostalgia time.  Time to take a trip down Memory Lane and revisit one's youth.  Time to think about the first true fictional hero this old fart, as a youth, first discovered.
The incredibly brave, forever optimistic, dashing Civil War cavalryman, John Carter of Virginia.  Or . . . in the modern update of today's moviedom, the incomparable John Carter of Mars.
Holy schnickies, Edgar Rice Burroughs!  Did you EVER capture the imagination of a gangly, toothy, adam's apple-bobbling youth's imagination as you captured mine when I first read your A Princess of Mars,  the first in the series of heroic sci/fi adventure tales set on the red planet of Mars---or Barsoom, as you called it in the series.  I found the novels around the age of twelve or thirteen.  Read every one of'em at least five or six times-----along with ever other novel ERB wrote.
Yeah, it was ERB who created the fictional icon called Tarzan.  But in my mind, still true today, Tarzan is no comparison to John Carter.  It's like comparing a boy to a man.  John Carter was the complete hero; swordsman, flyer, extremely brave, indomitable . . . and with a sense of humor.  Schnickies!!  How could a kid like me not become a hero-worshipping, ardent fan?  Still am!  Fifty fracking years later and I'm STILL an ardent fan!
Which leads me to the main theme for this blog.  The other day I finally got to go see the movie, John Carter of Mars.  I thought it was fabulous.  Well made, brilliantly photographed, with a plot line for the story which made it infinitely believable (for science-fiction, mind you).  So good in fact I'll be buying the DVD when it comes out and I plan to eat many of a bowl of popcorn over the years seeing it over and over and over.
But the question is this;  why did the critics pan it as an artistic/financial dead cow?  It has everything there to make it a success.  A rip roaring story--a handsome, believable hero, a really really beautiful heroine (Dejah Thoris)---some really interesting bad guys.  The works.
So what happened?
I haven't got a clue.  It's one of those unanswerable Zen-like questions in life.  Much like why do tornadoes always hit trailer parks.
Edgar Rice Burroughs created both the Tarzan and the Barsoom series sometime around the 1912/13 era.  An old cavalryman himself, the man had both experience fighting Indians and knew the Arizona desert much like John Carter does in the opening pages of the novel.  Ten more Barsoom novels followed.  And what made them so great was, like any great science-fiction, Burroughs weaved into his tales the going science facts then being voiced in his era.  Indeed astronomers were talking about possible canals on Mars.  Flying machine using some kind of rays--radium explosive bullets--machines to create and maintain the slowly dying Martian atmosphere.  The works, baby; the works!
Of course by today's standards of fiction-writing, if you read the novels you'll note they sound a bit hokey.  But read them in the context/time-frame they were written they'll blow your mind away!  I think they still work well today.  And I think all science-fiction/fantasy writers owe a big, big debt to the guy who essentially created the American genre.  Read the books!  Discover, or re-discover, Edgar Rice Burroughs!  You won't be disappointed,
And go see the movie.  It's damn good and deserves a better fate.
Posted by B.R. Stateham at 9:26 AM