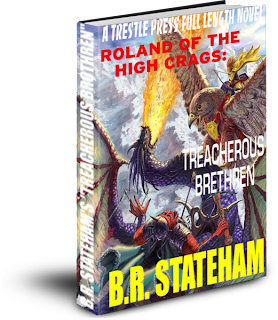 Treachery.
Treachery of a trusted comrade handing over to his enemies the one person who might end an endless war.  The treachery of a loving son who murders his father in an attempt to save his clan from certain destruction.
When was the last time you read a fantasy series that was dark, brooding, and complex?  A fantasy series that redefines Magic.  Makes magic adhere to rules--forces the magician to refrain from using too much magic.  Makes magic demand a return payment of some type when its powers are used.
When was the last time you read a series which defined in a totally unique way the place where magic resides.  Where the dead go after they leave their bodies.  Where Time runs like an endless river, deep and devious, from horizon to horizon.
Book two of the Roland series will be coming out in a few weeks.  Called Roland of the High Crags: Treacherous Brethren.  A human warrior-monk and accomplished wizard is asked by a dying dragon nobleman save, and then raise, his only surviving heir.  A seven year old dragon princess.  But she is no ordinary princess.  She is a powerful weapon honed and shaped by the dragon gods.  A weapon designed to unite all of dragon kind and send them on a holy war to exterminate humanity.
Treachery.
The human warrior-monk, known as Roland of the High Crags, agrees to the task.  Agrees to raise the child as his own--agrees to teach this weapon and try to convince it to turn against its creators.  To defend humanity--and dragon kind--from the many dark prophecies which predict either the dragon, or man, will ultimately be destroyed.
When have you read a fantasy series which tried to change the very definition of fantasy?  That's what I'm trying to do with this series.  Change fantasy.  Make it more colorful.  More adventurous.  More . . . thoughtful.  Of course I haven't a clue as to whether I'll be successful.  It's a big task . . . some would say a grandiose task . . . even attempting to redefine a genre.  Egotistical even.
But what the hell.
Why not try?  I certainly don't want to write something that's nothing more than a rehash of something that's been rehashed over a thousand times before.  There are elements of the typical fantasy story in this series.  There is a quest story.  There are heroes and villains.  There are damsels in distress.  Fire-breathing dragons.  Impossible escapes.  Magic.  The works.
It's not that a new canvas and a new set of paints have been created to rewrite a genre.  It's how the old themes, the old colors, the old images are rearranged which will define something new.
We'll see how book two goes when it finally comes out.  Maybe it'll work.  Maybe not.  But at least I'm trying to do something different.  Sometimes that's the best we can do.  Just try.
Posted by B.R. Stateham at 4:59 PM