'Insatiable' has arrived! I'm howling at the Moon as we speak! 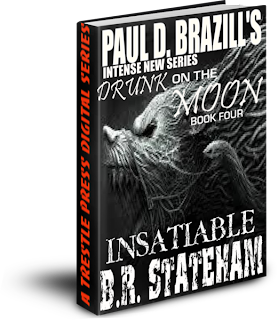 It's out!  My offering to Paul D. Brazill's Drunk On The Moon series.
I'm pumped!  I'm a nervous wreck!!  I've chewed so much of my fingernails worrying about this writing assignment I'm down to bone.  Just the idea of Paul inviting me to get involved in this project was a humbling experience.  But then I had to write something.  I had to take his private investigator-closet werewolf character and run with it.
I mean . . . come on, Lady Gaga!  You're up at the plate and you'd damn well better be swinging for the fence line!
So I started writing.  Hadn't a clue how it was going to end up.  Knew I had to put the werewolf motif in there somewhere.  Wanted to write a 'Fer sure, Dude!' genuine whodunit.  And then I got an idea.  One I thought had some legs to it.  What if . . . what if I wrote about the character just two days before the full moon came out and made him all hairy and with a bad attitude . . . what if I described how it felt knowing the 'change' was coming?
I mean, think about it.
Those who are a werewolf must know--must feel--a slow process within himself of the physical changes that are about to explode within him when the first moon beam hits him.  So what would change?  His sense of smell?  His vision?  His hearing?
His sense of  . . . . taste?
Add to the this the request from an old friend to help him solve a murder.  A murder so horrible, so brutal, it had to be caused by, yeah that's right, a werewolf!  So our P.I. friend is approaching his 'change' and at the same time trying to solve a vicious crime.  How does he stop himself from leaping onto his friend, when the time comes, and making his old buddy an evening snack?  How does he find and remove from the city a werewolf who happens to be much older, and far stronger, than he is--and not create a panic among all the potential meal tickets walking around?
Ah . . . you'll have to buy it to find out the answers, me boyos.
Notice how each of the covers in the series remains essentially the same.  I like that.  It gives off a feeling of continuity that bespeaks the main concept Paul had in mind for the series,   It's like the old serial Saturday afternoon movies kids used to go to before the advent of television.  You
were fed installments ever weekend--and left the theater  wondeing how the hero was going to get out of the newest predictament 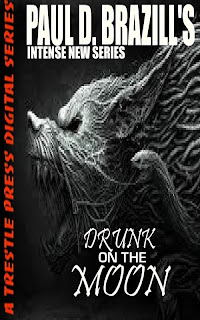 which ended the reel.

So Paul's re-inventing an old ploy that I think will work and work very well!
How far does this series go?  Dunno. I do know they've got writers lined up for a few more installments.  Each installment is slated to come out about every three weeks.
Personally I hope this thing takes off and goes on for a very long time.  I would love to write another offering.  If asked.  But first, children, my offering needs to find an audience.  You should find it on Amazon.Com in the next few days.
It'll cost you about a buck for each of the selections.  Buy'em all and enjoy the lot.
Posted by B.R. Stateham at 12:16 PM