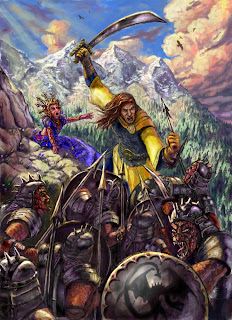 Yes, I write fantasy and science fiction as well.  Dark stuff when it comes to fantasy.  The series I've been trying to get up and running for the last few years, Roland of the High Crags, is really dark.  Almost brooding in nature.  As I think good fantasy could be--dark and brooding.
To be honest, Eunice, I've never been a fan of the traditional fantasy novel.  Over the years one epic series has began to sound like the last one I read.  The quest story in fantasy, as it seems all fantasy novels are, can get boring.  Boring and predictable.
And Eunice, dear--boring and predictable is the death knell for any book.  Or series.
So I wanted to create a series dressed in the garments of the traditional quest story; but make it far, far more complex.  I wanted to create a 'hero' who was, occasionally, not so heroic.  He had his flaws.  Tragic flaws.  He struggles to keep himself on the straight-and-narrow of his religious order's training.  But situations happen which makes him slip dangerous close to the Dark Side (how's that for a Star Wars hint, Eunice?)
And magic; what's this with unlimited magic without consequences?  Or limitations?  How about if we make magic like a kind of narcotic--the more you use, the closer you step to the edge of that abyss we call insanity.  How about if we created a place where all supernatural powers originate from.  Where the River of Time flows endlessly.  Where the Past, the Present, and the Future all reside in the same place.  Where, if you had the magical touch, you could meet . . . . you . . . from the past, present, or future and out of a myriad of different universes.
What if we created a fantasy series where both friendship--and treachery--walked hand in hand with each other.  Where enemies might prove to be the most devout of stalwart friends and allies--and normal friends and allies were all too likely to stab you in the back.
Hmm . . . . .see what I'm driving at, dar'lin?
Traditional fantasy that is not so traditional.  That's Roland of the High Crags.  A warrior/monk/wizard who is asked by a dying dragon nobleman to promise him he, Roland, would safe and raise his last remaining heir to his barony; a dragon female child of seven.  An innocent, naive child.  For now.  But soon--very soon--she could be something else.  Something not so innocent.  Not so naive.
Ah, Eunice old girl, when was the last time you read a fantasy novel that promised so much intrigue and moody subterfuge?  Yes . . . yes, grab another bottle of beer and let's talk about writing fantasy novels that make you want to stop and think about what's been revealed as you read.
And don't forget the pretzels, hun.
Posted by B.R. Stateham at 12:57 PM