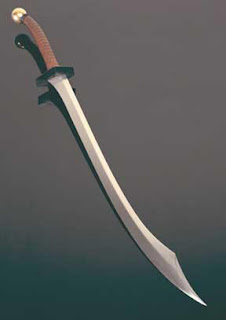 Magic swords.
Or some other prop which has magical properties which, when wielded by the hero or the evil main character, carries along the story.  In movie Crouching Tiger, Hidden Dragon  we have The Green Destiny.  A magical sword that glows a slight green color when handled by a master swordsman.  In the Lord of the Rings novels and movies we have the evil forged ring everyone seems to be compelled to posses.
Props.
I don't know if I am for them or against them.  But I do know that in my fantasy series called Roland of the High Crags a magical sword is indispensable in the overall plot.  The sword is, like the photo above, a scimitar.  But a strange weapon indeed.  It is made of an extremely odd metal that has the color of brightly polished bronze only a few select owners of the weapon can see.  Down the length of the blade, on both sides, is blue lettering of a language long dead and forgotten.  But lettering that, when confronted with genuine evil, visibly moves.  The blade is called Helshvingar.  The Killer of Evil.
The blade has that name for a reason.  Which, ultimately, will be revealed.
Ah.  But is the sword magical?
I think in my last blog I said I've never been really impressed with ordinary fantasy novels.  Magic, dragon, warlocks--all of it.  My dream has always been to write something 'magical' and turn it--eventually--into hard science fiction.  So instead of writing a 'fantasy' novel--it eventually turns into 'heroic' science-fiction.
Like an illusionist I'm trying to weave an act that looks like magic.  But in reality it is nothing but a slight-of-hand magic trick.  Done expertly in front of an audience it creates that 'Wow!' effect.  Okay; that's my challenge.  Write a series with the same set of principals in hand and create that 'Wow!' effect for the reader.
Posted by B.R. Stateham at 8:30 AM