Mark Gilroy is back 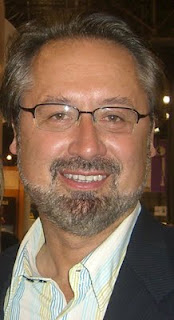 Mark Gilroy has two books out featuring his sharp edged homicide detective, Kristen Conner.  With this I came up with an interesting idea.
Why not give Mark free reign and let him discuss his books and his characters in any way, shape, or form he wanted to.  No stipulations attached.

Aha!  Little did I know Mark was going to make me look like a genius in the art of interviewing fictional characters!  It turns out I am particular insightful.

And of course, we already know I'm quite modest.

But here's the deal;  Mark Gilroy is a gifted writer.  If you like reading a dark story filled with interesting characters and a plot that weaves a gripping story line, well then pumpkin!  You need to 'discover' this guy and add your name to his fan list!


Klarissa Conner is a rising star as a television newscaster with the #1 station in Chicago—and is also well known as the younger sister of Detective Kristen Conner, the lead character in M.K. Gilroy’s novels, Cuts Like a Knife and Every Breath You Take. As an author—and fan—of murder mysteries, I thought it would be fun to interview the only recurring character that seems to give as good as she gets when dealing with Detective Conner.

BR: Klarissa, you host a popular weekend show on Chicago’s #1 news channel and frequently co-anchor the nightly news.  You’ve had an amazing start to your journalism career. What’s your secret to success?


KLARISSA: The key in this business is opportunity, and if it isn’t staring you in the face, you have to create your own. When I was at University of Illinois as a journalism student I worked as hard as anyone with the campus station—I was willing to go places and put in hours to report a story when others weren’t. That’s what got me my senior internship at the leading news station in Springfield, Illinois. I never complained when I was knee high in mud interviewing a farmer on the upcoming soybean crop and I consider my time in Springfield as a fabulous start to my career. Two years later I landed in Kansas City, a major league market. Because I’m a Chicago native and the daughter of a Chicago police detective, that undoubtedly helped open the door to my biggest break … so far.

BR: Your family is all in Chicago. Is this your dream job? Can you see making your career in the Windy City?

KLARISSA: Never say never. The media business is in constant flux, so it may not be up to me anyway. I’m very happy here and it would be hard to leave, but I would be lying if I said I wouldn’t like to land a national gig at some point.

BR: Anything in the works?

BR: I thought that was my line. (NOTE: She doesn’t seem as amused as I thought she would be by that clever line by yours truly.) You did a major interview with your sister, Detective Kristen Conner, following her last case, where she ended up killing the killer in the case known as the Billionaire Murder. What has been the response to that? Was that another break?

KLARISSA: I would consider that interview another huge break for me. Ratings were through the roof in Chicago and it got a lot of national and international play. The interview ended up in syndication and has been rerun extensively in markets of all shapes and size. We’ve had a couple million hits on YouTube. But let me just say, if my sister is involved, you work for what you get. She plays everything by the book. Her great fear has been that her colleagues at the CPD will think she leaks information to me because I’m media. I don’t even bother to ask what she’s working on anymore. But when I pitched this story it went straight to the commissioner. He and he brain trust at CPD—and I assume City Hall—thought it would be good to clear the air after all the media frenzy the investigation got. When the heir of a multi-billionaire is killed the interest is off the charts.

BR: So she doesn’t talk about her cases with you?

BR: The two of you had a traumatic experience together last year …

[SPOILER ALERT. IF YOU HAVEN’T READ CUTS LIKE A KNIFE SKIP THE NEXT PARAGRAPH.]

KLARISSA: We actually had two traumatic experiences. Our dad was shot on the job a couple years ago. He spent his last years as a quadriplegic before dying in early 2012. And yes, being targeted and then taken by a serial killer is one of those experiences that will never go away. In ways, Kristen saving my life is a bit of a microcosm of our relationship. Things are sometimes strained and prickly, but she always comes through in the end. Always.

BR: So your relationship with your sister is difficult?


KLARISSA: I didn’t say that. We’re different. We fight. But we 100% love and are loyal to each other. I don’t think we’re the only two siblings who drive each other a little crazy but are close.


BR: Are the two of you competitive with each other?

KLARISSA: We are both driven, but in such different ways that we never compete directly with each other. But honestly, we probably do compete. Don’t forget my older sister. Kaylen is the perfect Conner sister. She keeps Kristen and me humble.

BR: Let’s go back to the killer the Chicago media dubbed The Cutter Shark.

KLARISSA: I’m not going to say anymore about that. The main details are out there and I don’t have anything to add.

BR: Does it worry you that he’s still alive?

BR: Does it worry you that your sister is a homicide detective? Do you worry about her safety?

KLARISSA: I worry every day. But I also know she is tough enough for any challenge. She’s relentless. If you’re a killer and she is on your case, you should be worried too, but for your own safety.

BR: How do you think the Cutter Shark Case impacted Kristen?

KLARISSA: Kristen has never been an open book on her feelings. You’re going to have to ask her.

BR: Thanks for your time Klarissa. Any closing comments?

KLARISSA: You’ve had a lot of interest in Kristen, and I’ll just give you a heads up. Stay tuned. She always ends up being in the middle of something b
Posted by B.R. Stateham at 10:56 AM