Drunk On The Moon Lives, Baby! 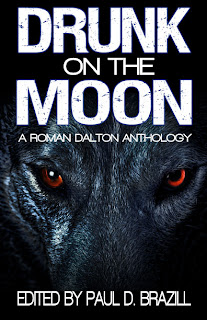 A few months back an English bloke I know by the name of Paul Brazill asked me if I'd be one of the original writers who would like to take a crack at writing a story about the good Mister Dalton.  His (Paul's) idea was to create and partially flesh out an interesting character (Roman) and then allow other writers to color in the rest of the man's personality.

As Spock would say on Star Trek; "Fascinating."

So I did.  Wrote a story called, 'Insatiable.'

A gruesome little story about one werewolf meeting another, and not so likable, werewolf.  Apparently a few people  actually liked it.

Roman Dalton still lives.  Paul has gone on to ask more authors to participate in this experiment.  I mean some really, truly, awesome writers who know their craft forwards and backwards.  It has become something of an international success.  American and European writers have pitched in their versions of R. Dalton--and every damn story has been, as the British say, 'spot on.'

A new collection of stories is out.  So I thought I'd ask him to Paul make a serious pitch about the new anthology.

And by the way, if you don't know Paul Brazill the writer, you should really make an effort to discover him.  A good man and a very good writer.  A writer who doesn't write the usual generic blend of tiresome dregs found in genre writing.  It's dark, surprising, mean sometimes (in a good way), and fresh.  And the endings are never what you expect them to be.  Just the kind of stuff I like.

So here he is.  Talking about his creation, Roman Dalton.  Enjoy.


Roman Dalton is a full time private eye and part time werewolf who prowls The City’s blood and neon soaked streets when the moon is full.


A few years ago, there was a buzz across the internet about Dark Valentine magazine, a cool and beautifully designed pulp mag that would feature horror, noir, fantasy — stories of all genres — as well as cross-genre stories. I knew of some of the people involved and thought that this would be a pretty classy joint indeed.


And I wanted in.


And this is where the confluence comes in.


For a while, I’d been thinking that the Tom Waits’ song “Drunk on the Moon” would make a great title for a werewolf story — Tom Waits was in the film Wolfen, and his gravelly voice could easily be that of a werewolf. Made sense to me …


And then I thought that, maybe I could raise the stakes even higher and write a werewolf noir…


And then, somewhere along the way, I wondered if some of my favourite dark fiction writers would like to dip a toe into Roman Dalton’s world.. Crime writers. Horror writers. Thriller writers.


And the result was Drunk On The Moon – A Roman Dalton Anthology, published as an eBook and in paperback by Dark Valentine Press.


Here’s the book trailer, with music by Peter Ord.

So what has Roman Dalton been up to lately?


K A Laity’s Weird Noir anthology has just been published and it includes a story called Black Moon Rising, which gives us a bit more of Roman’s cronies Duffy and Ivan Walker’s back story.


Well, the first Drunk On The Moon short story has been translated into Polish and will be published soooon! And more translations are waiting in the wings.


And there’s a second anthology on the cards , too, with stories from Matt Hilton, Vincent Zandri, J J Toner and more…


So, Roman Dalton is still howling! Why not join The Pack?