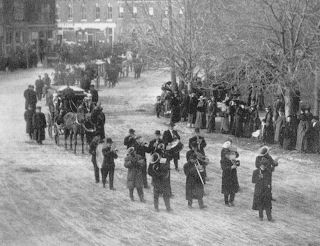 The surprising ending.  That 'kick' at the end of the story you as the reader may be kinda hoping comes along but maybe not fully expecting it to arrive.

To be honest I think these kind of endings are more important in the venue of short-story writing than in the longer venues.  Oh sure, we want our fill of surprises and discoveries when we're reading a novel.  But those come a few pages from the end of the novel---not at the very end where they seem to happen in a short-story.

And somehow (at least, for me)  when the come at the end of a short-story they are both far more surprising and far more satisfying.

So as a writer do you consciously plan for them?  Plot them out to the final period; the final sentence?  Or do you begin the story and somewhere in the middle of it suddenly have a spontaneous revelation on how the story is going to end.

(Raising my hand sheepishly and grinning like a rube)  That's me, brother.  No planning.  Just begin writing the damn thing and hope for the best.  You may have already guess, from reading perhaps some earlier posts of mine,  I'm not too big on outlining or forethought when it comes to writing a story.  My my motto is:  Just write the damn story.  It'll come to you!   So I start and fill in the blanks as I go along.

But you have to do what fits the bill for you.  The first rule (and the only one you really need to keep in mind) is this one.

(1).  Write the story which feels most comfortable for you and forget whatever the hell anyone else has said about it.

Just to show you what I mean I present to you an older Smitty story I wrote about a year and a half ago (I think.  Linear time is not all that important to me.  I know I wrote it after I turned 60 and before I turned 63.  So it's been one . . . two . . . years ago.  Maybe.  I think).  Anyway . . . read it and tell me if you think the end had enough of a surprise to it;  a surprise you were not necessarily expecting.

“Listen, that sonofabitch killed my father.  So I want you to kill him.”


“You think Ellery killed your father.  Why?”


“Why?  Why?  Because he wants to take over.  He wants to be the head of the family.  Three hundred million a year is a nice round figure.  More than enough reasons to want to be the capo de capo.”


“But I thought your father died of natural causes.  A heart attack, wasn’t it?”


“There was no damn heart attack,” Daniel Venelli growled, pulling the cigar from his mouth and shaking his head. “Dad’s ticker was strong.  He was as strong as an Ox.  Took care of himself.  Had regular check ups.  No, this was murder.  And Ellery was the one who ordered the hit.”


Daniel Venelli was the oldest of the two Venelli brothers.  Ellery was the youngest.  Both men carbon copies of their father.  Small framed.  Smartly dressed. Athletic.  All three as hard as tempered steel and as ruthless as a Great White.


Sitting in the stretched Daniel’s stretched limo, with the car parked at the curb of the only paved street which wound its way through a hilly, tree filled manicured cemetery, the man with the black eyes sitting alone in backward facing seat looked first at Daniel Venelli and then at the small man sitting beside Daniel.  There was, in the facial construction of the smaller man, a definite family resemblance to the Venelli clan.  The same jaw line.  The same compactness of the body frame.  The same structure in the eyes.


Gilbert Venelli was the man’s name.  A cousin to Daniel and Ellery.  A very quiet, very shy man.  But he wasn’t either Daniel or Ellery when it came to being outright ruthless.  The brothers—like their father—could be ruthless.  They’d kill with a tire iron just as easily as they could with a gun.  And possibly enjoy it more with the tire iron.


Gilbert was different.  He was quite.  Contemplative.  Intelligent.


And for years working as Daniel’s right hand man in the organization.  A loyal soldier through and through.


“I want you to kill my brother.  Today, Smitty.  Half a million dollars is yours if you can get it down before sundown tonight.”


Smitty’s black viper eyes looked directly into the face of Daniel Venelli for a moment and then he nodded.  Opening the door of the limo he rolled out of the car and walked away . . . walked toward the gathering dignitaries for the funeral of Tomas Venelli.  The father.


It was a crisp autumn morning.  The trees filling the cemetery were ablaze in outrageously bright colors of Fall.  A sharp, cold light breeze, filled with the promise of a wet, snow packed winter, nipped at the ears of both men and women somberly dressed in black as the stood huddling in a pack and waiting for the funeral to begin.  He too was dressed in black.  A tailored black suit of silk covered a slim, hard frame of bone and muscle.


And eyes as black as sin took.


Turning, hearing the soft whisper of footsteps across the lawn, he watched the figure of Ellery Venelli, followed by his assorted goons and sycophants, approach.


“What did my brother want, Smitty?”


“Nothing.  Nothing important,” the dark eyed man said, smiling. “Said with your father’s death there was going to be a period of adjustment everyone had to endure.”


Ellery Venelli, an exact replica of his brother, nodded and turned to glare at the limo setting at the curb.


“Loyalty? Why would you ask, Ellery.  You know what I am loyal to.”


A vicious, hard grin stretched the thin gray lips of the younger brother as a grunt of humor came up out of the man’s diaphragm.


“Money.  The only thing you’re loyal to.  Money.  I like that, Smitty.  I like that.  So I have a proposition for you.  A quarter of a million in cash—clean and untraceable—is yours if you’ll kill Daniel for me.  Today.  As soon as you can after the funeral.”


Smitty gazed into the eyes of the younger brother, then glanced toward the limo encasing Daniel Venelli, before returning his gaze back to Ellery.  With a quiet, gentle nod toward Ellery, Smitty turned and made his way toward the grave site of Tomas Venelli.


The ceremony was a quiet affair of Catholic fanfare.  The attending mourners . . . a broad spectrum of the family’s henchmen, corrupt judges and politicians, sprinkled with a few dignitaries from the city’s police force . . . sat in compact rows underneath a green canopy.  Smitty, standing at the back of the canopy, watched and listened.  With hands folded in front of him he made no sign of recognition when he felt and heard the presence of Gilbert Venelli step up beside him.


David and Ellery Venelli sat at the head of the gathering, heads bowed and respectful as the Priest worked his clerical magic on the crowd.  Diligently they marched past the casket.  Each laid a rose on the casket and then moved away.  Dutifully they shook hands with everyone who approached and offered them condolences. But neither brother said a word to each other through the ordeal.  And when the moment came they separated and moved away from each other quickly.


Black eyes watched as Daniel Venelli and his entourage hurried toward their limos and piled in.  Stretched limos, two of them, pulled away from the curb and started moving down the winding lane and away from the mass of parked cars.


And then a strange thing happened.


The limo in front, the one carrying Daniel Venelli, suddenly shuttered, clipped a Ford Crown setting at a curb, jumped the cement curb and then plowed grill-first into a massive oak tree.  The limo’s horn began blaring and wouldn’t stop.  Several women screamed in terror and a number of men began running toward the limo in an effort to pull Daniel and his hoods from the damage vehicle.


Ellery Venelli, watching incredulously as he stood beside his limo with a hand on the rear door, watched his brother’s car crash into the oak tree.  A frown played across his lips as he turned and looked for Smitty standing in the crowd.  But he did not stand around for long.  His bodyguards opened the door and shoved their man into the backseat unceremoniously and then leapt in themselves.  With a squealing of tires the black Caddy roared past the line of parked cars, past the smashed Mercedes of Daniel Venelli, and started screaming down the wide open cement ribbon of the road and for the cemetery’ main gate.


It never made it.


Almost to the cemetery’s big gate the car exploded.  Exploded in a thunderous roar of noise and flying debris, hurling the car ten feet into the air before crashing onto the thick manicured grass and onto its shredded roof in a bright funeral pyre of roaring flame.


And through all of this, as people screamed and fled in panic in every direction, neither Smitty nor Gilbert Venelli moved a muscle.  But, eventually—when the immediate area around the two men was barren of any living soul, Smitty slipped a hand into his suit coat and walked down the aisle between the empty chairs underneath the canvas canopy and toward the open grave of the father.  From his coat he withdrew three black roses.  One at a time, solemnly, he tossed each one down onto the casket of the elderly Venelli.


When finished with this quiet act of respect for the fallen, he turned and stared at Gilbert Venelli.  And nodded.


The family business was in good hands.  Competent hands.  Intelligent hands.  The family feud was over.  The strongest Venelli had won.