Eleven From The South Side 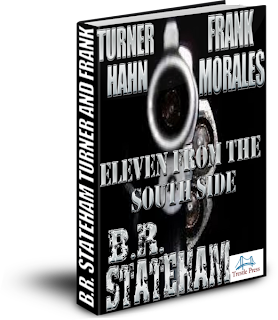 Okay, I decided to bite the bullet.  Create a third short-story series with Trestle Press.  I'm already involved in the Smitty series--that dark eyed hit man of mine.  And recently I've created Marissa Hamm and Mike Bean, two homicide cops who are, shall we say, constantly at war with each other.
So heck fire, why not add a THIRD series to the writing frenzy!
Actually this isn't really adding a third series.  Turner Hahn and Frank Morales, as you already know, have been around longer--far longer--than either Smitty or Hamm and Beans.  Turner and Frank or the originals.  The first characters of mine who popped out of my head and became living, breathing entities.  Old friends of mine--two whom I cherish greatly.  Long before Trestle Press, and long before Smitty or Hamm and Beans came along, Turner and Frank had been hitting the ezine markets regularly.  They're unique brand of 'whodunits,' mixed in with their own form of camaraderie, make them different.  Interesting.  Believable.
Or at least, that's what I think.
So it didn't take much time to scrounge up eleven short stories featuring these two. 'Thought I'd list the stories and briefly offer a short description.  You know . . . maybe get you interested in the two when they finally hit the market.  (nothing like a little shameless self-promotion.  Eh, me hearties?)
So here's what you should expect:
1. Just Stupid: A friend of the two is charged for murder.  He was at the wrong place, wrong time, and . . . well, just stupid.
2. Goddess:   Some women you trust.  Some you shouldn't.

3. The Curious Mr. Klaus: It's Christmas!  As deadly as ever.

4. Family Ties:  A family you probably wouldn't want to get chummy with.

5. Coercion:   Sometimes 'by the book' gets you nowhere.

7. Burn Away: Let's just say it; deadly is deadly.
8. Silence:  Sometimes both the victims and the perps get to you.

9. Cracker:  You need to have a droll sense of humor in this job.

11. We Found Beatrice Bonner:  Serial killers are not your friends.

Eleven stories that are, when it comes to the solving of homicide cases, a Caesar's Salad of murderous intent.  Eleven From The South Side is not out yet.  But it will be soon.  Between now and then we might change the cover art a little--although I'm thinking it's pretty damn good as is. 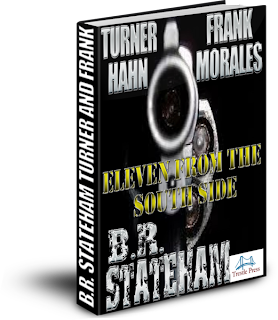 If you buy this I think you'll like what you find.  Turner Hahn and Frank  Morales are two guys you'd want to have on your side.  Or to just sit down and share a beer or two at your favorite watering hole. I'll let you know when it's available.
(after some interesting discussion on Facebook, the second book cover will be the one to come out. Good choice)
Posted by B.R. Stateham at 12:52 PM