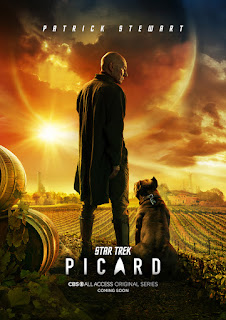 Greetings, fellow trekkies. Thought I'd weigh in today on the newest franchise of the Star Trek family, the one called Picard.

I've waited this long so the fanfare, and fanfare's distant cousin, rioting, settled down into just a dull buzz. But gosharoonies, fellow trekkies, did Picard really stir up dustbin of a disturbance in the Force with its arrival. A disturbance which, frankly, caught me off guard. For months I had been eagerly anticipating Picard's arrival. Jean-Luc Picard, the starship captain we fell in love with from StarTrek; Next Generation a few years past, is not exactly the same Jean-Luc Picard in the newest rendition we witnesed recently.

But that's a good thing, me hearties. It really is.

The Picard in the newest show is older, and more bitter, than the Picard of old. Forced into retirement by Star Fleet, disillusioned by the sudden, and in his way of thinking, unforgivable abandonment of the Romulan diaspora forced upon the Romulan home world by their soon-to-explode home star, Picard sits in his French ancestral home stewing in his own bitterness and just waiting to die. But along comes a chance to go back into space. To possibly save the children of Data no less . . . and remember, Data is an android . . . and the old man finds a reason to live again.

I'm not going to get into the inner workings of the series. Nor am I going to talk about all the new characters introduced in the series . . . although I will say this; everyone of them are just pretty damn interesting. (the captain of La Sirena, Chris Rios, played by the actor, Santiago Cabrera, is the one I like the most). But they are all good. And each character has a potential for a fascinating story or two about their backgrounds.

What I will say is this. An aged Picard is exactly what we need today. To continue with the Picard of Old is to continue to live in the Past. We are all human. We all age. We all must face our eventual demise. But Picard is an example telling us all that, just because we age and eventually we die, it does not mean we are yet not meaningful. Nor we have become discarded flotsam that no longer has any usefulness in the real world. There are still challenges, still dreams, still accomplishments waiting for us if we but only step forward and try.

I say Picard is nothing more than a Celebration of Life. And throw in a hell of a lot of adventure in he process. Nope . . . the old Picard is not going to get into fights and come out the winner this time. But his intelligence and his wit are still intact. And his desire to do the right thing is still there.

And frankly, me buckeroos, what else is needed in order to live a full life?
Posted by B.R. Stateham at 11:17 AM