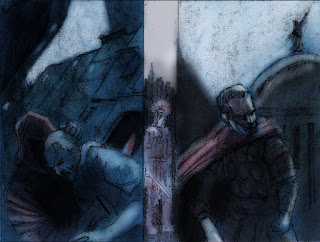 So . . . how to fix a problem?  The Decimus Julius Virilis novel (As the Emperor Slept) apparently has a problem.  Or problems.  It starts too slow.  And, apparently, the 'motivation' for Decimus to investigate a serious of vicious political-tainted homicides, is questionable.

So how do you fix a set of problems like this without going through a massive rewrite?  You keep everything intact and just add a 'starter button' at the beginning.  One that's guaranteed to grab the reader's attention and get the ball rolling.

So I thought I'd share a few of the opening pages in an effort to see what you think of the 'starter' idea.  Whatta think?