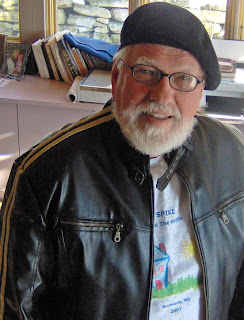 5.  Give us your prognosis on the health of genre fiction today.  Is it healthy and growing?  Is it slowly dying off?  Or is it somehow changing into something else?
I think this is a very exciting time for writers and readers. E-books, blogs, special apps, digital magazines...are giving us access to each other in a way science-fiction writers fifty years ago could only imagine. I have 25 books on Kindle, mostly under “Jack Lehman.” All are five bucks or less and you don’t even need a Kindle, they will provide a free app at the site for computers, iPads, etc. I say this, not to brag, but to encourage what anyone can do instead of waiting 25 years to interest a traditional publisher (reducing his or her work to their tired formulas).
6.  Who do you see coming up through the ranks that might soon burst open and become the next mega star. Care to make any predictions?
As I’ve implied in my answer to the question above, we don’t need megastars anymore. There are fresh new voices, with fresh new ways of saying things, to readers who want “now.”
7.  In relation to the above question, in your opinion, what does it take for a writer to succeed?  Talent or determination?  Or just plain Luck?
Talent, luck, determination are all important, but you need to aggressively reach out to readers in a way that speaks to them. And if you don’t know how, the answer is: learn. Marketing. It means more than selling books, it involves understanding and appreciating your readers in a way that is beneficial to them.
8.  What's next for Lit Noir?  Is it branching out into a more extensive publishing format? Get serious, perhaps, in e-publishing novels?  What does the future hold?
We are doing single issues and bundling each four into Kindle anthologies. Reaching out to people we think might benefit from being under our umbrella. I am in rural Wisconsin and getting pieces and ideas from Poland, Russia, Switzerland and elsewhere in the U.S. This is exciting. And so unexpected, I can’t even imagine where it will lead. But where ever it does, I am ready to follow.
I strongly urge you to go out and find John's works.  There's a wide variety to choose from.  And I urge you to check out Lit Noir (uh . . . especially # 9).  Writers from all over the world are creating a mag of astonishing qualities.
You won't be disappointed.
﻿
Posted by B.R. Stateham at 2:17 PM