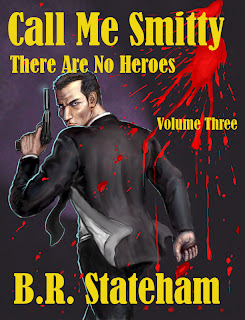 In anticipation of its arrival in the Amazon Kindle Store, I'm presenting to you volume three of the Call Me Smitty series.

Call Me Smitty: There are No Heroes.

Seven short stories featuring you know who . . . Smitty.   A dark character with a rather severe strain of biblical justice embedded into his psyche.  To say the man has a damaged sense of right and wrong might be going a bit too far.

But then again, maybe not.

In this particular genre there are a lot of tough guys out there.  You can name them better than I can so I'm not even going to try.  So me trying to parse together someone to insert into this overcrowded venue and expect him to hold his own has been, shall we say,  a sizable chore to accomplish.  In the end, that's for you to decide.

But I will say this.  I've tried to make Smitty both colder yet, somehow, more trustworthy.  You don't really want to upset Smitty.  On the other hand, having a guy like this around when the real shit hits the fan would be a damn fine idea.

And I'm trying to expand the man's clientele.  He's not just an assassin.  Now, for the right price, he cleans up other peoples' messes.  Or contracts out to super secret spy agencies no one knows about and hides their dirty laundry.

Seventy seven pages of bloody revenge, vicious double crosses, along with an assorted venue of blood and mayhem.

I like every story in here.  But I admit I do have favorites.  Yet I'm wondering if my choices are going to be yours as the two 'best.'  I particularly like the very first story, called There Are No Heroes, and the very last story, called I'm Sure.

It should be popping up in the Kindle store shortly.  And (confession time here) you'll note the original art work is not quite the same as the one here.  A small correction had to be made and I'm trying to get the new cover up to replace the original.

And while we're at it, you might as well check out volumes one and two of the series.  Especially volume one.  You'll find out how Smitty became Smitty. (you can find those at the top of the right hand column)